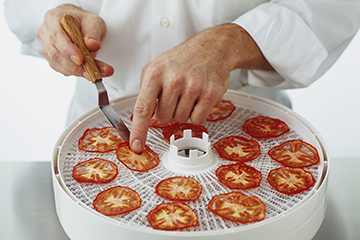 When it comes to dehydrating food at home, your options range from using your microwave to purchasing your own actual dehydrator.
Dorling Kindersley/Getty Images

You don't need big, fancy machinery to dehydrate your own food at home. In fact, most people already have everything they need to get started. The only three things that are required are heat to push out moisture, dry air to absorb it and air movement to carry it off.

A simple way to dehydrate food is to take a page from our ancestors' book and dry it in the sun. This technique is basically free: All you need is about three to four days of direct sunlight and humidity levels below 20 percent [source: Jopp]. Unfortunately, this precludes much of the United States (with the exception of the desert Southwest), where cool and moist conditions could cause mold growth before the dehydration process is complete.

Food can also be air dried, which is done indoors. Great candidates for this method are herbs, hot peppers and mushrooms, which should be threaded on string or tied in bunches and hung, like in the stillhouses of medieval times. Slap on a paper bag for dust protection, and you're ready to go.

If you want to kick the technology up a notch, but not the cost, try dehydrating with your oven. Heat the oven to 140 degrees Fahrenheit (60 degrees Celsius), prop the door open a couple of inches and set up a fan to blow across the opening. Place the food in a single layer on a cookie sheet. Drying times can range from one hour for herbs to 48 hours for juicy, meaty fruits like peaches [source: Boyer and Huff]. Microwave ovens can be used as well, but only for herbs. Place several branches between paper towels, and you should have dry, brittle herbs in just two or three minutes.

Finally, you can purchase a home dehydrator, which generally consists of a heating element, a fan for air circulation and trays on which you arrange the food. Like oven drying, this method produces results ranging from a couple of hours to a couple of days, depending on the food. Dehydrators usually produce the best results, but they can cost you anywhere from $40 to $350.

With any of these methods, proper preparation is essential. For instance, some foods are better blanched before they are dehydrated. And meat is particularly tricky, as it must be trimmed of all fat and cooked before dehydrating. There are plenty of great websites with preparation tips and drying times, so be sure to check those out if you get serious about trying dehydration.

Buy It or Make It at Home?

When you factor in equipment costs, energy rates and time investment, sometimes dehydrated food is simply cheaper to buy at the grocery store — particularly in the bulk bins. If you're looking to save money by drying at home, however, be on the lookout for discounted produce, and be prepared to dehydrate a lot at once if you find a good deal. When comparing prices, remember that dehydrated food weighs as much as 90 percent less than its fresh equivalent, making direct per-pound price comparisons unreliable [source: The Backcountry Chef].

A week before my deadline for this article, I spent three nights in the Grand Staircase-Escalante National Monument. On the menu for dinner? Lasagna with meat sauce, chicken teriyaki and the consensus favorite, chicken fajita filling — all freeze-dried. Once rehydrated, I thought the flavor and texture of the meat, vegetables, noodles and grains was surprisingly close to what I might eat fresh at home. But maybe I was just really hungry from a full day of hiking.