by Shelley Danzy Jun 29, 2017
Nondairy milk is a burgeoning industry in many countries, but it may be causing delays in kids' growth. Purestock/Getty Images

Got milk? Maybe not. Cow's milk sales are declining, and nearly half of Americans drink nondairy milk. There's almond, cashew, flax, coconut, hemp, quinoa and even pea "milk." The long and short of it is that while 69 percent of consumers deem nondairy milk as healthier for their children than dairy, new research published in The American Journal of Clinical Nutrition indicates that little ones drinking noncow's milk are shorter, on average, for their age. That's enough to make you say "moo!"

Researchers at St. Michael's Hospital in Toronto examined the height measurements and questionnaires of 5,034 2- to 6-year-olds. Based on parents' responses, 84 percent of the children drank only cow's milk; 5 percent drank only noncow's milk; 8 percent drank both; and 3 percent drank neither. The study authors found that for every cup (250 milliliters, or 8.5 ounces) of noncow's milk the children drank, they were 0.4 centimeter (0.2 inch) shorter. Their cow's milk-drinking counterparts were 0.2 centimeter (0.1 inch) taller than average for each cup they drank.

Putting this in perspective, let's say little 3-year-old Jenny drinks three cups of noncow's milk every day. She runs the risk of being around 1.5 centimeters shorter than Tammy, who drinks the same amount of cow's milk. Jenny could drop from the 50th percentile to the 15th percentile on the World Health Organization's growth chart, according to the researchers. Even adding some cow's milk into Jenny's diet wouldn't help her short stature. When the researchers conducted an analysis to determine how children drinking both cow's and noncow's milk fared, they found that drinking noncow's milk was still associated with a 0.3-centimeter lower height per cup of noncow's milk.

According to the WHO Growth Standards, below-average height could potentially indicate health issues, but more research needs to take place before the research team could even begin to speculate why the children were shorter. One thought is that children who drink noncow's milk may simply be consuming less fat and protein needed. Certain milk components , such as protein, minerals and lactose, are pretty important to a child's growth. Two cups of cow's milk has about 16 grams of protein, 100 percent of the daily requirement for a 3-year-old. The same amount of almond milk? Only 4 grams of protein, 25 percent of the daily requirement, the study authors say. Other foods, like fish, eggs and beans, are also sources for protein, although children may not always get a sufficient amount of the nutrients from them.

The United Nations' Food and Agriculture Organization states that there are still no global recommendations for consuming milk or dairy. Countries often have their own dietary guidelines, based on factors like availability of local food, cost and food habits. Yet worldwide, nondairy milk sales have become a cash cow of sorts, doubling to $21 billion between 2009 and 2015. And in the U.S., the industry is anticipated to grow 50 percent between 2015 and 2020.

But until further research is conducted on the nutritional benefits and disadvantages of noncow's milk, the height of children on a dairy-alternative diet may continue to stop short of their milk-guzzling peers.

Here's Why You Shouldn't Eat a Box Turtle in the Wild 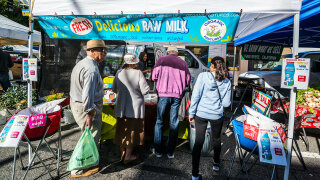 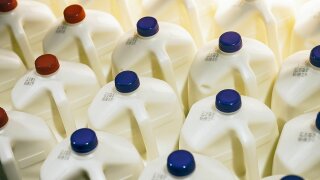 Why Chugging a Gallon of Milk Is Nearly Impossible 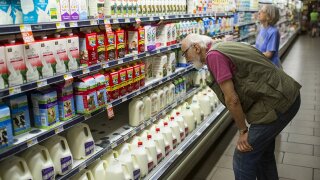