What is flash steaming?

Browse the article What is flash steaming? 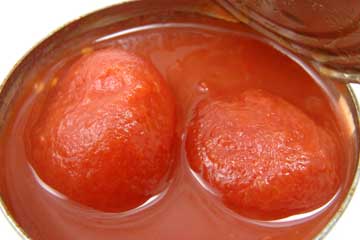 Tomato peels jump ship in a hurry when they're exposed to a steam bath. See international tomato recipe pictures.
©iStockphoto.com/bedo

If a recipe calls for a couple of peeled tomatoes, you might consider peeling fresh ones yourself by tossing them in a pan of boiling water for a few seconds. But if you consider the manpower it would take to line ever grocery store in the world with shelves containing skinless tomato products, well, you begin to realize there has to be a more efficient way.

Enter flash steaming. Flash steaming uses basically the same process you would at home, but on an industrial scale. And instead of using a pot of boiling water, flash steaming involves steam, as the name implies, to make the magic happen. The process is pretty simple. Typically, a batch of tomatoes is fed into a pressurized metal chamber that's rotating slowly. Hot steam is shot into the chamber, where it heats up the surfaces of the tomatoes but leaves the interiors uncooked. The moisture underneath the skin of the tomato is vaporized by the heat, and it loosens and peels away. After just a few seconds, the steam stops and is sucked back out. Then the product is cooled, often with jets of water that also help clear off any remainders of peel. And it all happens in a flash, as it were.

Flash steaming is a step along the production line for all sorts of foods. Tomatoes can be found on lots of ingredient lists, after all, and most of the time they don't get there with their peels still on. Tomato juice, salsa, pizza sauce and ketchup are good examples, to name just a few.

When it comes to pulling the peels off an assortment of fruits and veggies, there are other methods that can also be used, like lye peeling, flame peeling, knife peeling and abrasion peeling. Different foods work best with different techniques, although some can be processed by more than one means. For example, lye peeling is also sometimes used in tomato processing.

To find out how fast a flash steaming machine can work -- and more about all those tomatoes popping out of their peels -- continue on to the next page.

Back in a Flash: How Foods are Flash Steamed 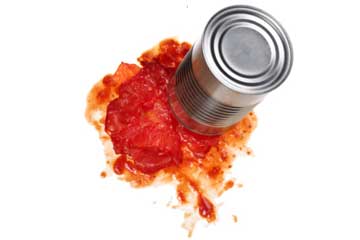 The process of flash steaming is so speedy that standard machines can typically process up to about 30 tons (27 metric tons) in a single hour [source: JBT FoodTech]. That speed is a bonus, since in 2004, each American alone consumed about 19 pounds (9 kilograms) of fresh tomatoes and 70 pounds (32 kilograms) of canned tomatoes [source: Rickman et al.].

Most of the tomatoes grown in the United States come from California -- its tomato crop accounts for about nine out of every 10 tomatoes processed in the country. During the height of California's tomato season, about 2 billion pounds (907 million kilograms) of tomatoes are produced each week [source: California Tomato Growers Association].

No chemicals need to be used during flash steaming, which is always a plus. Flash steaming also preserves the majority of the tomato, so not a lot is lost in the process and what is leftover can be fed to animals or used as fertilizer. And the peeled surfaces tend to come out looking nicer than they would have if left unpeeled, which is good when picky consumers are on the prowl.

Flash steaming isn't only used on tomatoes -- it can also work to peel other foods like potatoes. When it comes to tomatoes though, the ones you see in the produce section tend to be bred and processed quite a bit differently than the ones that get carted off by the truckload for processing within a matter of hours after picking.

For example, unless they're vine-ripened, tomatoes destined to be sold fresh are usually picked while they're still green so they have time to make it to the market, while ones grown for processing by flash steaming are picked nice and ripe so they have the traditional bright red hue. They've also been bred to have thicker skins, which is a good thing for those unlucky tomatoes stuck on the bottom of a 50,000-pound (about 23,000 kilogram) load -- the typical tomato truck haul size.

For more most-know food facts, head over to the next page.