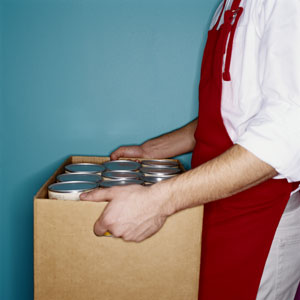 Depending on how it's stored, canned and boxed food can last a long time. See more boxed food pictures.
Ryan McVay/Getty Images

The average American family of four throws away more than 120 pounds of food every month [source: CBS]. That's a lot of waste, especially in tough economic times. Instead of tossing out all those dusty old cans and boxes, open them up and make them part of your next meal. Depending on how it's stored, canned and boxed food can last a long time. But which lasts longer?

The answer really depends on what kind of boxed food you're talking about. Today, boxed food encompasses a number of different preservation techniques, including airtight bags (think cereal), vacuum-sealed bags (like the ones lunch meats and bacon come in), frozen containers (TV dinners, for instance) or dried goods (such as a box of pasta). Regardless of how it's packaged, frozen food can keep for months or years -- sometimes even for decades. In one extreme case in the early 19th century, William Buckland, a professor at Oxford University, served his dinner guests meat from an extinct mammoth that had been frozen for more than 10,000 years [source: Shepard].

No matter how they're preserved, many boxed goods contain chemicals that inhibit or kill bacteria. (Bacteria are what makes food perishable to begin with.) Sorbic acid, sodium nitrite and sulphur dioxide all lengthen a product's sell-by date, but they can also decrease a food's nutritional value.

Canned food isn't laden with chemicals and preservatives because all the bacteria are killed during the canning process. This process allows sealed cans to remain fresh for years. Although most canned foods have no expiration date, it's not recommended to keep them longer than two years. However, the majority of canned foods are still edible long after that period, but their taste, color and texture may alter slightly [source: Canned Food Alliance].

That's not to say that all canned food is chemical-free. While many brands of canned meats and vegetables have little to no preservatives, other popular canned goods are rife with chemical preservatives. In fact, the chemical bisphenol-A (BPA), is frequently added to the liners of canned foods, such as chicken soup, ravioli and many brands of baby formula. There's some evidence that might link BPA to cancer, lowered sperm count, miscarriages and birth defects [source: Natural News]. In March 2009, the U.S. House of Representatives announced legislation aimed at outlawing BPA in products consumed by infants and children [source: JSOnline]

It may be a toss-up as to which keeps longer -- canned or boxed food -- but both kinds of goods have an extended shelf life when they're properly taken care of. They should be stored in a cool, dry place, such as a pantry or cupboard. Bagged boxed goods, such as cereal, can be resealed in airtight containers to prolong freshness after their initial opening. The mixture of air and metal may adversely affect foods' flavor, so any leftover canned goods should be removed from their original container and refrigerated after opening.

Canning and bottling both follow the same sterilization process, which involves sealing the food in an airtight container and applying enough heat to kill any bacteria. In fact, the term "canning" applies to any container that undergoes this treatment, including bottles and boxes.