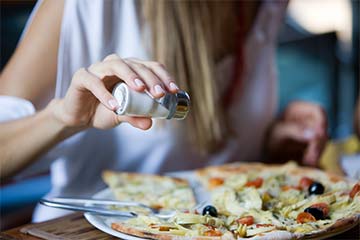 Salt on your pizza? Why not? Salt enhances the natural flavors of just about anything.
webphotographeer/iStock/Thinkstock

A slice of juicy watermelon is the perfect summertime treat – refreshing and light and just the right amount of sweet. Next time you cut open a watermelon, though, try this weird little trick: sprinkle a slice with a pinch of salt. Salty watermelon? I know, it sounds wrong, but instead of tasting salty, the watermelon will pop with sweetness.

Taste is the least understood of the five senses. There is no single organ, chemical receptor or neuron in the human body that's solely responsible for decoding the molecules and compounds in foods and translating them into flavors. Yet our bodies and brains work together to quickly differentiate salty from sweet, bitter from sour, and yucky from yummy.

As little as we understand about the chemistry of taste, we know that certain naturally occurring substances and chemical additives have the mysterious effect of enhancing the flavor of food. Salt is the classic flavor enhancer. For 10,000 years, humans have been adding salt to their food, initially as a preservative, but also because salt has the power to make even the most bitter vegetables and gamy meats taste delicious [source: Henney et al.].

Glutamate is another naturally occurring substance believed to give foods like seaweed, mushrooms and Parmesan cheese their distinctly savory and almost meaty flavor. In the early 20th century, Japanese researchers isolated pure glutamate and paired it with the salty kick of sodium to create one of the most potent and controversial flavor enhancers of all time: monosodium glutamate or MSG.

All of us consume flavor enhancers every day, sometimes in alarming amounts. They are added to our favorite processed foods, restaurant meals and snacks to make the sweet and savory flavors "sing" and to suppress hints of chemical bitterness. Nacho Cheese Doritos, one of the most objectively delicious snacks on the planet, contain not only loads of MSG, but seven other glutamate-rich ingredients (like Romano cheese, and onion and garlic powders). They also have plenty of salt [source: Souza].

Even the healthiest home cook knows how a few cranks of salt, a dash of soy sauce or a dollop of glutamate-rich Maggi sauce can make the difference between health-food blandness and the clean-plate club. But why?

Join us as we investigate the science of taste and learn how a handful of natural compounds and controversial chemicals can trick our brains into saying "more!"

The Science of Taste

Why do humans have a sense of taste? Like our other senses, the ability to taste adapted and evolved over millennia in response to environmental pressures. Just as humans developed keen eyesight to both spot predators and check out potential mates, our sense of taste serves two basic purposes: keeping us alive and healthy enough to reproduce.

The taste buds concentrated on our tongues are armed with fine-tuned taste receptor cells that connect, through nerve pathways, directly to the brainstem [source: Henney et al.]. When we pop something into our mouth, these receptor cells analyze the molecules in the food for five different taste categories: salty, sweet, sour, bitter and umami (savory).

When our ancient genetic ancestors roamed the forests and steppes searching for food, a sensitive palate could mean the difference between life and death. If the leaves of a plant taste were especially bitter, they could be poisonous. A salty taste could mean that the food contained important minerals and nutrients. And sweetness suggested the existence of glucose, the original brain food.

But our sense of taste goes way beyond the tongue. The flavors we sense from food are the combined result of several simultaneous and little understood processes. The odors of food, not necessarily their direct "taste," play a huge role in delivering flavor. (There's a trick where you hold your nose while eating a jelly bean. Chances are you won't be able to taste its flavor.) Those odors drift up the back of the throat into the nasal cavity where they light up a panel of smell detectors. How food tastes is also a learned experience that depends on what you ate as a child, or even what your mother snacked on when you were still in the womb [source: Beckman].

Flavor enhancers tinker with both the evolutionary and emotional components of taste. Sodium and glutamate, for example, are both critical to cellular function. We have to consume a baseline amount of these minerals and amino acids daily to survive, which partially explains why we have evolved to not only sense salty and savory flavors, but to find them delicious.

But why does the addition of these substances to other foods enhance or otherwise alter the way we experience them? Salt, for example, can not only make chocolate taste sweeter, but also somehow make canned soup taste "thicker." Scientists are just beginning to understand how salt suppresses the detection of bitter chemical compounds, therefore bringing out a food's natural sweetness or savory edge. As for "thick" soup, salt might also trigger "touch" neural systems that send mixed signals to the brain [source: Henney et al.].

They put WHAT in my ice cream?

Skatole is the naturally occurring molecule responsible for the odor of, well, poop. But in very small concentrations, skatole smells sweet, which is why they mix synthetic skatole into ice cream [source: May and Cotton]. Yup, ice cream.

Salt is the original and universal natural flavor enhancer. The salt shaker on the diner counter and in your kitchen cupboard is filled with table salt, which is produced by solution mining, injecting water into underground salt beds and evaporating the brine into crystals. Salt that's marketed as "sea salt" is evaporated by the sun directly from ocean or salty lake water [source: Maldon Salt].

Salt has been mined, traded and consumed in vast quantities for at least the past 5,000 to 10,000 years. Salt was the world's first preservative, helping to cure meats and ferment vegetables. The average human living thousands of years ago would have eaten 3,000 to 5,000 milligrams of sodium – almost exclusively through salt – each day [source: Henney et al.].

That's not so different from today; the average American consumed about 3,400 milligrams of the stuff in 2013 every day, although the recommended daily sodium intake for adults is 2,300 milligrams [source: Mayo Clinic].

As a flavor enhancer, salt is unmatched. Studies show that the flavor of processed food improves directly with the addition of more and more salt, up to a tipping point. (And don't think that food scientists aren't pushing that limit.) Salt is believed to work by suppressing the body's sensory perception of naturally bitter compounds like caffeine, magnesium sulfate and potassium chloride [source: Henney et al.]. That's why sweet foods tend to taste sweeter and savory foods even richer and brighter when salt is added.

MSG, a synthetic umami enhancer, is a glutamate bomb, but there are plenty of foods with high levels of naturally occurring glutamic acid. In Japan, stocks made from kombu, a sea kelp, are rich in glutamate. Shiitake mushrooms, Parmesan cheese, anchovies, tomatoes, dried shrimp and egg yolks are also used by chefs and home cooks worldwide to boost the savory, well-rounded umami flavor of foods [sources: Moskin, Turner].

Home cooks looking for a healthy, natural way to enhance the flavors of family meals can use some classic kitchen tricks. Fresh herbs mixed into a finished dish – like fresh parsley into pasta, or chopped cilantro into taco filling – can add bright layers of flavor without extra salt. A dash of vinegar or a squeeze of fresh lemon or lime can also zest up a plate of fish or stew with much the same effect as salt [source: Clower]. 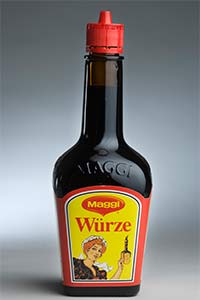 Maggi seasoning sauce is made by a Swiss company and used all over the world as a flavor enhancer, particularly in Asia and Latin America.
© Gaetan Bally/Keystone/Corbis

MSG (monosodium glutamate) is the king of artificial flavor enhancers. The amino acid glutamate was first isolated in 1908 by Tokyo Imperial University Professor Kikunae Ikeda, who derived the substance from dried kelp, the same kombu used to make traditional Japanese stock [source: Turner]. Ikeda is credited with the discovery of the "fifth taste," umami, translated from Japanese as "savory" or simply "delicious."

A year later, the Japanese company Ajinomoto developed MSG, a powdered form of glutamate with the added kick of sodium. MSG is used as a flavor-enhancer throughout East Asian cuisine. Japanese, Chinese and Thai food is generously seasoned with MSG to make the savory flavors in brothy noodle and meat dishes soar.

Outside of its pure powdered form, MSG is also the active ingredient in some of the world's most popular jarred sauces, seasoning blends and condiments: like Maggi seasoning sauce in Mexico and India, Kewpie mayonnaise in Japan, and Accent seasoning in the U.S., which is actually pure MSG [source: Moskin].

In America, MSG is often treated as a four-letter word, closely associated with outbreaks of so-called "Chinese restaurant syndrome" – bouts of headaches and dizziness caused by eating Chinese food laced with MSG [source: Moskin]. While research has shown that decreased consumption of MSG can lower the risk of headaches, there is no direct association between eating MSG and feeling sick [source: Xiong et al.]. Otherwise, large potions of Asia and Latin America would have a constant headache.

To avoid having the nasty letters "MSG" on their labels, American food processors use other glutamate-rich additives like yeast extracts, hydrolyzed proteins and anything with the word whey [source: Moskin].

For its part, Ajinomoto didn't stop with the invention of MSG. The Japanese company has developed a full line of umami-enhancing amino acids for the food industry. There are low-sodium versions of MSG like monopotassium glutamate (MAG) and monoammomium glutamate (MPG) and another family of compounds called free nucleotides.

Two popular free nucleotides sold by Ajinomoto are IMP (disodium inosinate) and GMP (disodium guanylate). Both exist in nature and work in tandem with the amino acid glutamate to boost the umami flavors in food up to 30-fold [source: Souza]. There's IMP in cheese, for example, that pairs with the glutamate in ground beef to up the umami ante of cheeseburgers. Synthetic IMP and GMP are just as powerful when teamed with MSG. No surprise they are the two final ingredients on the back of that bag of Nacho Cheese Doritos.

In our house, we love to cook. We spend way too much time planning the week's meals, and way too much money shopping for ingredients, but we get tremendous satisfaction out of enjoying a healthy, delicious home-cooked feast. Home cooks, by nature, use much less salt, sugar and fat in their cooking than restaurants and processed food manufacturers. It's not that we eat kale salads every meal, but when we use ingredients like thick-cut bacon and brown sugar, we do it in moderation. The unfortunate flipside of this cooking style is that when we occasionally go out to eat with friends, we usually find the food incredibly salty. Our kids feel it, too. While not exactly "Chinese restaurant syndrome," we end up feeling dehydrated and tired. I wish restaurants didn't feel like they have to produce such "explosive" flavors at the potential cost of their customer's health. Or at least their taste buds.