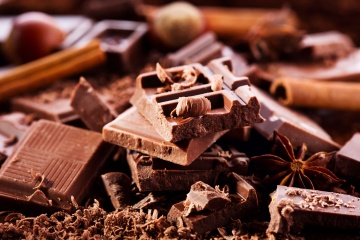 Chocolate is one of the most popular sweet treats around, but do claims of addiction to it have any basis in science?
© Nikolay Trubnikov/iStock/Thinkstock

Are you one of the millions of people who call themselves a chocoholic? Do you get weak in the knees when you walk past a chocolate shop? Keep emergency chocolate hidden in your drawer so no one will find it? Fall victim to midnight chocolate cravings? Don't worry, no judgment here.

Chocolate does indeed feel addictive, and here's why: When we eat sweet or high-fat foods, our brains get as happy as our taste buds. Sugary and fatty foods cause the brain to release serotonin, which helps stabilize our moods and ward off depression. And because these foods activate the pleasure centers in the brain, studies show that people can become dependent on sugar and fat in their food. Some chocolate addicts even exhibit traits similar to those of drug addicts, such as cravings, irregular eating, anxiety, and abnormal moods [source: Collingwood].

But doess chocolate fit the true definition of addictive? You might joke around and say you're addicted to chocolate and simply can't live without it. But let's look at the science.

These components describe drug addiction, but studies show people can exhibit these behaviors with certain foods, as well. The studies even showed similar brain activity between drug addicts and participants presented with chocolate milkshakes [source: Miller]. However, these situations are extreme and don't account for the majority of the population.

Some people point to phenylethylamine, a compound found in chocolate, as proof that it is indeed addictive. Phenylethylamine is a chemical thought to imitate the brain chemistry of someone in love. But you can find higher concentrations of phenylethylamines in foods like cheese, almonds and avocados – and not many of us are making midnight runs to the grocery store for a fix of avocados.

Another study performed in 1994 on some chocolate lovers yielded interesting results. Participants were given packets to eat whenever they experienced a chocolate craving. Some packets contained chocolate, some white chocolate (which does not contain the active elements of chocolate), and some a tasteless capsule filled with cocoa. By scientific reasoning, if chocolate is indeed addictive, the capsules should have filled the chocoholic need. They didn't. Participants chose the white chocolate over the capsules, even though it contained none of the compounds of regular chocolate [source: Yoon].

The general consensus is that we crave and seek out chocolate simply because it tastes really, really awesome -- not because it's addictive. Many of us see it as a forbidden pleasure, which makes us want it more. And that's why it feels so very addictive.

And remember, there's nothing wrong with indulging once in a while. Savor your chocolate, make it last and remember to buy the good stuff.

What's the Difference Between Whiskey and Bourbon?
U.S. Food Banks Stretched Thin as Demand Skyrockets in 2020
How many calories are in a tomato?