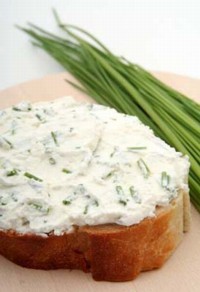 Used as a spread or as an ingredient, cream cheese livens up any recipe.
©2007 Edyta Pawlowska

Q. Someone told me I could use cream cheese in place of heavy cream in cooking. Is this true, and, if so, how much?

A. Even though they're significantly different products, there are some circumstances in which cream cheese can be substituted for heavy cream.

Heavy cream is also known as whipping cream or heavy whipping cream, depending on the part of the country you live in, but it's all the same thing: liquid cream with a butterfat content between 36 and 40 percent. Cream cheese is a spreadable, tangy, soft cheese that is the main ingredient in cheesecake and a popular spread for bagels.

Cream cheese is a tasty addition to cream-based soups; simply add small cubes of cream cheese to soup after removing it from the stovetop and stir until melted. Cream cheese can also be added to cake frostings or fillings instead of milk or cream. This substitution changes the flavor and thickens the texture.

Q. I like to make cheesecake with plenty of cream cheese, but it's always hard to remove it from the pan. Is there anything I can do to make it come out with ease?

Another trick is to make sure the crust (usually a graham cracker crust) is pressed not just onto the bottom of the pan but also at least part way up the sides of the pan.

If these suggestions don't work, try this idea from Rose Levy Beranbaum's The Cake Bible (William Morrow, 1993): Refrigerate the baked cheesecake overnight in the pan.

Cover a baking sheet with plastic wrap and set aside. Remove the cheesecake from the refrigerator, and place it on a burner over low heat for just a few seconds to warm the bottom of the pan. Then run a knife around the edges of the cheesecake.

Place the prepared baking sheet upside down on the top of the cheesecake; invert the cake onto the baking pan, peel off the parchment or waxed paper circle, and re-invert the cheesecake onto a serving plate. Good luck!

Q. What's the best way to use a package of cream cheese?

A. The subtle yet creamy flavor of cream cheese comple­ments so many foods and seasonings.

Developed almost 130 years ago by a dairy farmer in New York, cream cheese is a soft, mild-tasting white cheese made from cream and whole milk. It differs from other cheese in that it's not allowed time to mature and is meant to be consumed fresh. It contains only about half the fat and calories of butter.

Keeping a package of cream cheese in the fridge means you always have the major ingredient for dips, spreads, appetizers, and cheesecakes, not to mention an enrichment to many sauces. Here are a few ways to use it:

A tip: For easier handling and smoother texture, soften cream cheese slightly before adding to other ingredients. To soften quickly, place on microwave-safe plate on high setting in micro­wave for 15 seconds.

Q. Is there an easy way to measure cream cheese? I finally decided to just soften the bar of cream cheese and measure the old-fashioned way.

A. Cream cheese is sold in 3-ounce and 8-ounce bricks. One ounce equals about 3 tablespoons (9 teaspoons), so you can figure that the 3-ounce size has about 9 tablespoons, which is 1/2 cup plus 1 tablespoon. The 8-ounce size, then, would equal about 24 tablespoons, or 1-1/2 cups cream cheese.

An easy but perhaps not entirely accurate way to measure cream cheese would be to slice the 3-ounce size into three equal pieces, yielding approximately 1-ounce portions. Each portion could further be sliced into thirds, which would give you approximately 1-tablespoon pieces.

The most accurate way, though, is to do what you did: Soften the cream cheese at room temperature and measure what you need with standard measuring spoons and cups.

Looking for some great recipes that highlight cream cheese? Try the following: