What's the difference between an herb and a spice? 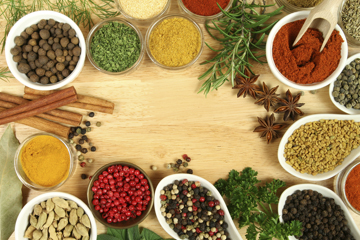 Herbs and spices can make food more enjoyable, but what's the difference?
fotokris/ThinkStock

Imagine your favorite meal. Perhaps it's pasta with a rich and spicy red sauce. Or an Indian curry with a slow heat that warms you for hours. Maybe a fiery Cajun gumbo you relish, bite after zesty bite. Now imagine that same meal without the benefit of a single spice or herb. Not quite the same, right?

Adding herbs and spices to foods that would otherwise be bland and boring is an age-old practice. There's evidence of herb gardens dating to the Middle Ages. And one of the earliest known records of using spices comes from the ancient Egyptians, who used anise, saffron and cinnamon, among other seasonings. Some of the spices they used, such as cinnamon, weren't even native to Egypt, which leads historians to believe the Egyptians imported the spices from far-flung trade routes that were in existence some 3,500 years ago [source: Penn State].

While most of us probably buy our herbs and spices at the local market instead of relying on trade routes, these little flavor powerhouses are no less important. Today, even the most occasional cooks have access to rare and interesting herbs and spices, even if we don't always know the difference between an herb and a spice. And it's easy to understand why — the definitions can be confusing.

An herb's definition is twofold. The term "herb" is used to describe both a certain type of plant and the herb the plant produces. Let's start with the herb plant: It bears seeds and its stems are fleshy, not woody like those of trees or perennial shrubs. In addition, it's the leaves of herb plants, not the seeds, that are commonly called herbs in the culinary world; these leaves are green, even when dried, and offer relatively subtle flavors when added to foods.

In contrast to mild-tasting green herbs, spices have more assertive flavors and come in variations of black, brown, red and yellow. The seeds of herbs and other plants are considered spices, along with the roots, fruits, flowers and bark of certain plants and trees.

It's easy to think of herbs and spices as being from two entirely different categories of plants, but this is often not the case. Take Coriandrum sativum. This plant, also known as coriander, provides both herbs and spices. The bright green leaves, whether fresh or dried, produce an herb called cilantro. Meanwhile, the plant's brown seeds are dried and become coriander.