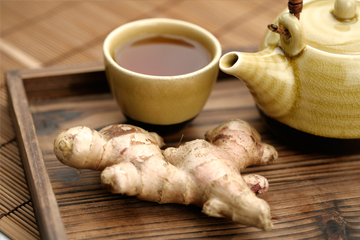 If you want to use ginger to relieve nausea, you may want to try ginger tea.
Imagemore/Getty Images

Ginger is the rare traditional remedy that gets genuine respect from medical doctors and natural healers alike. It's been known for thousands of years (mostly in India and Southeast Asia, its native habitat) as a kind of jack-of-all-trades healer, and its reputation has endured. But it's probably best known for its antiemetic effect — that is, its impact on vomiting and nausea.

Ginger has been the subject of much medical research in recent years, most of which confirms its benefits for a wide range of ailments, and they're not all digestive. It's been shown to have positive effects on arthritis, immunity, colic, heart problems and the common cold, to name a few. It's also possible that ginger could hinder the development of certain kinds of tumors. But the lion's share of the research has been about ginger and the digestive system. It's been shown to work as a carminative (flatulence inhibitor) and intestinal spasmolytic (digestive-tract soother). It also can help with nausea brought on by motion, pregnancy and chemotherapy.

We often refer to the fresh ginger we eat — those knobby chunks with the tough skin — as "ginger root," but that's not totally accurate. The ginger we eat is actually the rhizome of the Zingiber officinale plant (the horizontal stem from which the roots extend). Gingerols are the active compounds in the ginger rhizome. They're responsible for its distinctive taste and smell, and they also have pretty potent anti-inflammatory and antioxidant properties. Scientists aren't sure exactly how gingerols effect our digestive systems, but it might have something to do with obstruction of the serotonin receptors in the gut that cause that nauseated feeling. It's also possible that gingerols help the body release enzymes that aid in the breakdown of food.

If you want to try ginger to relieve nausea, it comes in many forms. Ginger tea is an often-recommended first line of defense: Slice off a couple of half-inch pieces of raw ginger, and steep them in hot water for a few minutes (and you might want to use some honey or lemon to tame that potent ginger taste). You also can add fresh ginger to your food or check out ginger supplements, candies, powders, extracts, capsules and oils. Best-case scenario, you'll discover a tasty treat that can help you feel better. And even if you don't find that the ginger helps your symptoms, you won't have any of the drowsiness or side effects that over-the-counter nausea drugs can cause.