Is homemade kombucha safe to drink? 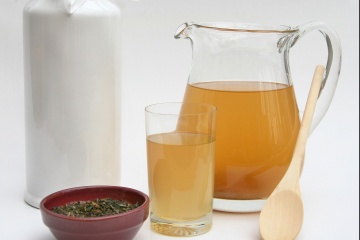 Have you ever heard of kombucha tea? Maybe a better question is, have you ever smelled it? Despite its strong scent, proponents of kombucha won't give it up anytime soon. Touted by its fans as chock-full of healthy stuff, kombucha is currently enjoying its moment in the spotlight -- even though it's 2,000 years old [source: Puniewska].

The ingredients in kombucha are quite simple: tea (usually green or black), sugar, and an active starter culture. This starter, usually called the "mother culture," is made of bacteria and yeast. It's best described as a blobby skin of bacteria that sits on the top of the tea. Some people even name their culture (really!). The mixture sits for about 10 days, fermenting, and once it's done, the culture can be scooped out and used to start another batch. The resulting drink is a fizzy, somewhat vinegar-like tea.

Kombucha enthusiasts speak about the health benefits of this drink -- probiotics, vitamins, antioxidants, immune system boost, more energy, better skin and hair, improved organ and digestive function and toxin elimination. However, most of these claims are based on anecdotal evidence only, and not much scientific evidence exists to back up any health claims. Regardless, kombucha continues to rise in popularity.

Because store-bought kombucha fetches upward of $3 per bottle, many people have turned to making their own kombucha at home, which costs just pennies.

It turns out quite a few things can go wrong while making homemade kombucha, though. Because store-bought kombucha is produced under sterile conditions, consumers don't need to worry about harmful bacteria getting into the mix. However, when you make kombucha at home, your kitchen, equipment and hands may not be as clean. Dangerous molds can make their way into the tea -- some may be toxic or even carcinogenic. People with compromised immune systems are at great risk if they ingest any bad bacteria or mold. Making kombucha in ceramic pots is another bad idea. Acids in the tea can draw out lead from the ceramic glaze, leeching toxins into your drink.

The safety of kombucha itself, home-brewed or not, has been questioned. The tea has been linked to severe illness in a few cases. In 1995, two women who shared the same mother culture went into cardiac arrest. One died. An investigation didn't establish that the tea directly caused their illness, but researchers theorized it may have interacted with underlying conditions. Another man needed hospitalization after suffering a similar buildup of lactic acid in his bloodstream from drinking kombucha [source: Oatman]. Of course, these cases are rare, but they shouldn't be ignored.

Another issue with kombucha is the alcohol level from the fermentation. Even commercial manufacturers have had problems with this. A few years ago, Whole Foods pulled all kombucha products from its shelves due its teas continuing to ferment after being bottled -- raising the alcohol level to 3 percent [source: Oatman].

So, to answer the question -- is homemade kombucha safe to drink? If you believe in the health benefits of kombucha, buy it from a safe and trusted manufacturer to ensure you get all the health benefits. And keep the lid on. We say this with respect, but not everyone likes the smell.