How many people does one farmer feed in a year? 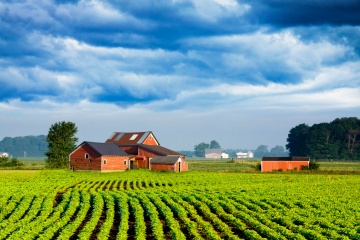 How many people could be sustained by the yield of a farm like this? That’s actually pretty complicated.
©iStock/Thinkstock

In the 1930s one American farmer produced enough agricultural product to feed a total of four people; a family farm was literally meant to feed a family [source: Kirschenmann]. Fast forward 40 years, and that number rises from four people to 73. Fast forward through 80 years of agricultural and bioscience innovation, and in the 2010s, one farmer produces enough food to feed 155 people [sources: USDA, Sullivan].

To better understand what that number means and how it was calculated, let's first look at the current state of farming.

To be considered a farm, at least in the eyes of the U.S. Census, a modern farmer must produce and sell at least $1,000 worth of agricultural products annually. Under this presumption, there are 3.2 million farmers farming 2.2 million farms on roughly 915 million acres of land in the United States [sources: EPA - Ag Center, USDA]. Together these farms produce crops for the more than 313 million people living in the U.S. — but they aren't just feeding America; U.S. farmers ship their commodities worldwide, exporting more than 50 types of agricultural products.

First, the farm bureau begins the calculation with a bit of accounting. They calculate the total sum of American farm agricultural product cash receipts (the amount of money a farm takes in on its sales and services) for a specific year — we'll call this number X. Then they subtract the trade balance (that's the difference between the value of the total exported goods and the value of the total imported goods, also known as net exports) for that same time period, which we'll call Y. The result of X minus Y is then divided back into X. The calculation is also designed to take into account the population of the U.S. during that time period, divided by the number of farms in the U.S. in the same year [source: Sullivan].

Nothing's Perfect: Flaws in the Calculation 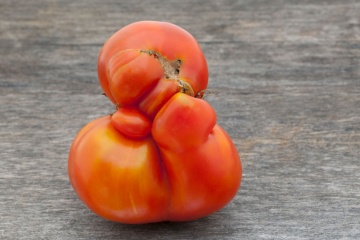 Misshapen produce sometimes isn’t even harvested because it’s unlikely to be purchased by consumers.
©iStock/Thinkstock

The fact that the method for calculating how many people one farmer feeds in a year is based on farms rather than farmers is not the only flaw in the final statistic. The number is also incomplete because it doesn't take into account the difference between crops we eat versus crops we don't eat, nor does it account for the amount of food grown that never makes it to the table.

Not all agricultural products are actually intended to feed people, but that isn't figured into the Farm Bureau's statistic. For example, corn has the honor of being the largest crop grown in the U.S., but as much as 40 percent of the corn U.S. farmers grow is turned into corn ethanol, which is used as an oxygenate in the gasoline for your car. More is used to feed livestock, and in the end only about 12 percent of it ends up as corn chips or high fructose corn syrup.

Soybeans, the second-largest crop, also face this problem. While crops are turned into soybean oil, which we do eat, as much as 47 percent supplies soy meal to feed animals. That translates into more than 30 million tons of soy meal earmarked for animal consumption [sources: EPA - Ag Center, Sustainable Table]. Soybeans are also used to make products not intended for human or animal consumption. Crayons, for example. One acre of soybeans is needed to make 82,368 crayons, and Crayola, for instance, makes about 3 billion crayons every year [sources: Wisconsin Soybean Association, Crayola].

And then there's the food that's intended to be eaten, but that we let go to waste. Americans throw away about 40 percent of what our U.S. farms grow for us. Sometimes that's because it's spoiled, but not always — 14 percent of food waste in the U.S. is actually edible food when we discard it [source: Gunders]. Despite food waste, the problem of uneaten food doesn't lie solely with consumers. Farmers and retailers also contribute to the problem. Some years as much as 6 billion pounds of American-grown fruits and vegetables are left unharvested either because demand for that fruit or vegetable is low or because the fruits and vegetables themselves aren't in model condition — tomatoes must be perfectly round and red, or we won't buy them. And according to the National Resources Defense Council, even when the product does make it to the store, retailers throw away as much as 43 billion pounds of food from their shelves [source: Gunders]. 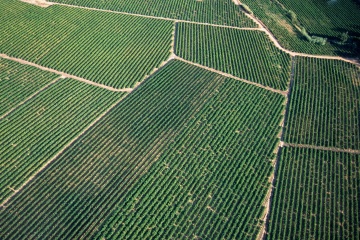 In the U.S., large-scale farming operations are more likely to produce exportable food and crops for non-food purposes.
©Thinkstock

The Farm Bureau's statistic, because it's based on a ratio, also doesn't distinguish the difference between the size of farms, what crops a farmer grows (and whether the farmer grows crops or raises livestock) or the method of farming that's being done.

Of all the 915 million acres being farmed across America, the average American farm is 434 acres, which is a modestly sized farm. Farms aren't considered large until their acreage is at least 1,000 acres (with annual sales between $250,000 and $499,999 — sales larger than $500,000 or more are considered very large farms). Small farms average 231 acres (and very small farms are nine acres or less), and it's these small farms that dominate the American farming landscape — as many as 88 percent of U.S. farms are small, with annual sales less than $250,000 [source: USDA].

And it's the small and moderately sized farms that end up providing more food for people to eat than do the large farms. How? It's a phenomenon experts call the inverse farm size-productivity relationship: Small farms in the U.S. and around the world are more likely to focus their efforts on actually producing food — crops or livestock — for humans to eat, whereas large farms are often more likely to be large-scale operations focused on producing to-be-exported commodities or crops not intended as edible (such as corn for biofuels or soybeans for animal feed). And because of that, farmers of small farms tend to contribute more food for people to eat.

What agricultural products a farm works with and the methods a farmer uses also matter when it comes to the potential number of people that year's yield can feed. 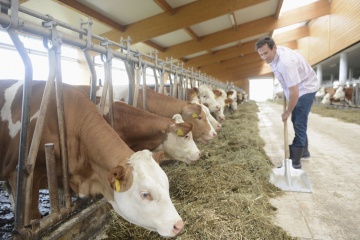 Livestock and crop types are variables that can significantly affect how many people a farm’s yield can feed.
©Stockbyte/Thinkstock

In addition to grains, fruits and vegetables, American farmers raise 7 billion livestock animals [source: Kellogg]. These animals are fed more of our farmed grains than people consume — five times more grain. Interestingly, if these crops were fit for and fed to humans instead of animals, the number of people fed by one farm could skyrocket, and the total tonnage could feed as many as 800 million people [source: Pimentel].

Every year those livestock farms produce a total of 7 million metric tons of animal products. We'll look at beef as our example: When it comes to raising cattle and producing animal protein to sell to consumers, the numbers break down to about 400 pounds of steak, ribs and other cuts for the American population to broil, roast or barbecue from one 700-pound animal [source: Dole & Bailey]. While the exact numbers vary depending on the method of raising the livestock (such as grain-fed and pasture-raised), if you consider one serving to be 3 ounces — the recommended serving, which is about the size of a deck of cards — that one animal contains slightly more than 2,100 servings.

And then there's the matter of farming method.

Put aside the ongoing debate on whether organic foods are more nutritious than their conventionally grown counterparts; when we're talking about how many people can be fed by one farm, we want to know about yield. And when it comes to organic farming methods, studies find that, generally, organic yields fall short when compared to those grown with conventional farming techniques.

However, before you shoot the messenger, it's important to understand that yields depend not only on method, but also on the type of crops we're comparing, in addition to whether we're looking at best-case scenarios or real-life outcomes. Taking those variables into account paints a more complete picture: The numbers may fall anywhere from just 5 percent smaller to as much as 34 percent smaller.

Author's Note: How many people does one farmer feed in a year?

Foods beyond their "best before" date, rotting fruit, leftovers that you forgot about that have gotten kind of fuzzy ... if you find yourself throwing away the container of yogurt you never got around to eating before its expiration date, I know how you feel. Americans end up throwing away a lot of food — 26 percent of vegetables, 24 percent of fruits waiting to be eaten and, overall, 14 percent (or more, depending on the report you read) of all the food we buy. And, embarrassingly, included in the foods we toss into the trash are items that are still good, maybe even unopened. So I'm keeping this tip in mind, and maybe you will, too: Soft, wilting produce can be revived in an hour-long cold water bath.