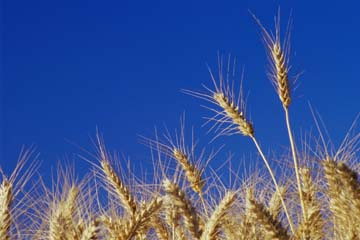 The differences in American and European wheat come down to the amount of gluten and selenium in each.
Purestock/Thinkstock

The European Union produces close to five billion bushels of wheat each year, while the United States produces about two billion bushels [source: Brester]. Unless you're a professional baker, you might think that all wheat is the same, but these two regions actually produce vastly different varieties of this crop.

Around 60 percent of U.S. wheat production is of the hard red wheat variety; just 23 percent consists of soft wheat [source: Brester]. In Europe, the principal strains of wheat are generally of the soft variety. So what's the difference between the two? Part of the difference lies in gluten, a protein blend found in wheat and other grains. Hard wheat has more gluten than soft wheat, and the gluten it contains is stronger than gluten found in soft wheat. This tough gluten is ideal for baking soft, fluffy bread that people are used to consuming in the United States.

Soft wheat has a very different consistency. It has less gluten — and less protein overall — than hard wheat, and what gluten it does have is weak and easily broken down. This softer wheat is generally preferred for making pastries, cakes, cookies and other non-bread products.

Due to soil and growing conditions, the differences between American and European wheat extend further than gluten content. American wheat contains about 10 times more selenium, a trace mineral, than European varieties [source: Shewry]. Levels of all proteins are lower overall in European wheat compared to American varieties [source: Gisslen], but many growers are working hard to increase protein levels to make this wheat more attractive to potential buyers.

Interestingly, despite the difference in gluten between American and European wheat, rates of celiac disease between the two regions are identical, with 1 in 133 people believed to suffer from this gluten-related autoimmune disease [source: Gitig].