Browse the article Jackfruit Is a Stinky, but Otherwise, Perfect Fruit 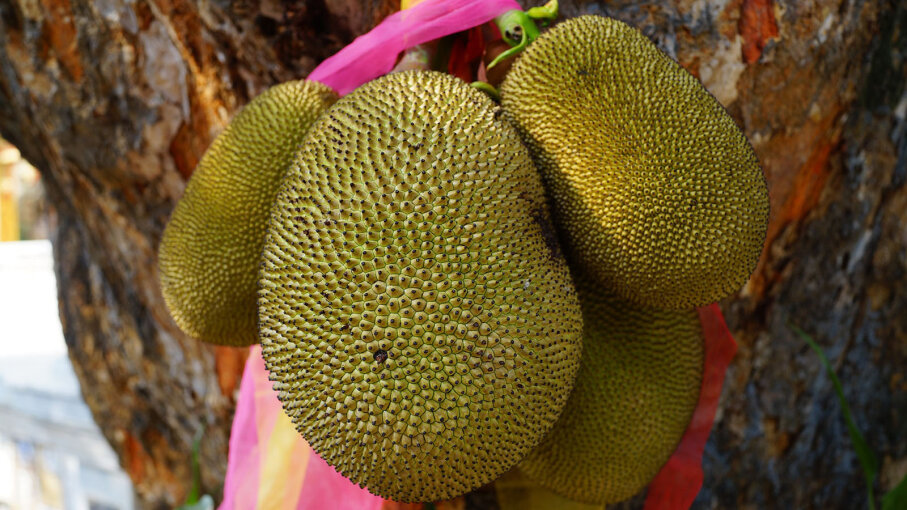 Jackfruit can weigh up to 80 pounds (36 kilograms) and grow to 36 inches (91 centimeters) long. Wikimedia Commons

Roman author Pliny the Elder was a fan of it. So were Chinese traders. There are even festivals in India dedicated to it. Now, more and more people in the U.S. are chowing down on the sweet, yellow flesh of jackfruit.

Jackfruit (Artocarpus heterophyllus) is a species of tree in the fig, mulberry and breadfruit family. Though there are more than 300 types of jackfruit in the world, the original jackfruit comes from India, says Ken Love, executive director of the nonprofit Hawaii Tropical Fruit Growers. Love, a farmer in Kona, Hawaii, has grown jackfruit for three decades. "[India is] the center of biodiversity of jackfruit," he says.

From there, the fruit spread throughout southeast Asia, the East Indies, the Philippines, Thailand, Malaysia and Indonesia. But what's so special about this fruit?

Jackfruit's name most likely came from the Portuguese who called it, "jaca," which was derived from "chakka pazham" the name used in southern India. Regardless of the name, jackfruit definitely isn't one of nature's prettiest fruits, though its tree is the largest fruit tree in the world. The fruit itself is also huge — it can weigh up to 80 pounds (36 kilograms) and grow to 36 inches (91 centimeters) long. However, the average fruit weighs about 10 to 25 pounds (4.5 to 11 kilograms).

As a crop, jackfruit is fairly easy to grow. One tree can produce up to 3 tons (2.7 metric tons) of food per year. Jackfruit grows best in tropical places like Africa, Brazil and South Florida, and can survive in some subtropical places such as the Japanese island of Okinawa.

Its spiky skin is yellowish and inedible, while its interior consists of fleshy, but not super-juicy, bulbs that join around a smooth seed. This flesh is dense and sweet, though it has a bad reputation for its sickly smell, especially when ripe. "It's kind of a cloyingly sweet smell," Love says. "It's just one of those things that some people love and some people hate, like durian." (By the way, despite often being confused for the same fruit, the two aren't even closely related.) It's often this smell — or its slimy texture — that puts people off.

The flesh of a ripe jackfruit is notorious for its incredibly stinky odor.
Wikimedia Commons

If you can get past its pungency, you can eat jackfruit just about any way you want. Green (or young) jackfruit don't have a strong flavor of their own, so they're able to soak up herbs, spices and other flavorings. They're extremely versatile and can be served as veggies when they're young, tender, raw or semi-ripe, and as fruits when fully ripe. Chakka thoran is a popular dish of jackfruit and coconut from Kerala, a coastal state in India where nearly every household has a jackfruit tree.

Jackfruit is also commonly used as a meat substitute in vegetarian and vegan dishes because, when it's prepared correctly, it has a similar texture and taste to meat like pork. In the U.S., it's becoming more popular as a pulled pork replacement in tacos, sandwiches, salads and barbecue dishes. "You don't have to limit yourself at all when using jackfruit," Love says. "It's pretty endless. I mean, anything that you can think of, you can use it for."

It also packs a nutritional punch of protein, dietary fiber, vitamins A and C, and potassium. And with only about 95 calories in a half cup, jackfruit is pretty low in carbs and calories compared to other fruits.

Where Do You Buy Jackfruit?

Depending on where you live, you may be able to buy fresh jackfruit already sliced into sections, or packed into cans, dried or frozen. Your local supermarket may not have fresh, whole jackfruit, but you might be able to purchase it from Asian, Indian or Caribbean food stores, or even online.

Fresh jackfruit will likely be sweeter than canned, which may be labeled "young" or "green." Canned is also usually packed in either brine, syrup or water, so note that when purchasing.

There are pros and cons to purchasing a whole, fresh jackfruit. Every part of the jackfruit is edible except the skin and center core. Even the seeds can be eaten (and they're delicious) when cooked, Love says. "If you cook them right, they taste like giant cashew nuts," he notes. Love even dries the seeds and grinds them into powder for gluten-free flour.

But beware: Cutting a jackfruit isn't always easy, Love says. Usually, you split it vertically into two and then use with your knife to extract the pods. Love says before you start cutting, coat your knife and hands with olive oil. The fruit inside is very sticky and almost impossible to work with otherwise. And don't forget, there's that smell to deal with.

NOW THAT'S INTERESTING
The wood of the jackfruit tree is highly-prized because it is termite and fungus-resistant. Palaces in the Indonesian island of Bali are made of jackwood, and it's also used for furniture, housing, musical instruments and oars.