Why You'll Go Bananas for Mangosteens

by Alia Hoyt May 27, 2020
Mangosteens are purple on the outside but white on the inside. They are eaten raw or made into smoothies or jellies. Carlina Teteris/Getty Images

Unless you've traveled through Asia, there's a good chance you've never laid eyes on, or even heard of, the mangosteen. The purple fruit sports a thick rind that some people find difficult to penetrate, but the creamy pulp inside is apparently oh-so-worth it. That's probably why it's commonly known as the "Queen of Fruit."

"Mangosteens are easily my favorite fruit of all time!" Jessica Randhawa, head chef and recipe developer for The Forked Spoon says via email. She and her husband first encountered mangosteen while trekking around Thailand a decade ago. "The flavor of the white fruit inside the thick purple skin is incredibly rich," she recalls. "We ended up eating a lot of mangosteen that day and every time we came across them thereafter during our travels."

Indeed, the mangosteen probably tastes like nothing you've ever sampled before. "The flavor is said to be light and citrusy, sweet with a slight sourness," emails Christian Miller, DPM, an extension agent with the University of Florida's Institute of Food and Agricultural Science. "Others have described it as tasting like a combination of strawberry, peach and vanilla with the texture of a lychee but not as firm."

Where the Mangosteen Is Grown

Mangosteens (Garcinia mangostana) are grown almost exclusively in Southeast Asia, as they're extremely picky about climate and growing conditions. The tropical fruit tree grows slowly and is easily damaged when temps dip below 40 degrees Fahrenheit (4.4 degrees Celsius), which is why most efforts to produce it outside of Asia are unsuccessful.

"Mangosteen is notoriously difficult to grow," says Miller. "Mangosteen trees grow best in soils that are well drained, slightly acidic and have plenty of organic material. Young trees are sensitive to direct sunlight and grow slowly. They are most often sickly in appearance, developing cholorisis (yellowing) and necrosis (browning) of the leaves and frequently death of the plant. Tree roots are also sensitive to wind stress and excessive salts from inorganic fertilizers."

As a result, the vast majority of mangosteens are produced where the climate is ideal, although Miller notes that small-scale production can be found in other tropical locations like Cuba, Jamaica, Panama, Honduras and Costa Rica.

While the taste is refreshing, the real magic of a mangosteen lies in its purported benefits. The fruit contains significant levels of calcium and Vitamin C, as well as naturally occurring organic compounds called xanthones, which Miller notes have anti-allergic and anti-inflammatory properties. "Traditional cultures also use the rind to cure diarrhea, make soap and shampoo, and the tree's hard wood is suitable as lumber," he adds.

To date, research hasn't fully validated the claims that eating mangosteens can reduce inflammation in people with arthritis. But eating the fruit certainly doesn't cause any harm either, so people with body inflammation may wish to give it a try.

That's provided they can get their hands on the fruit, as mangosteen can be difficult to find in fresh form in the U.S. Until 2007, fresh mangosteen was banned in the U.S., because of fears that fresh fruits could harbor the highly destructive Asian fruit fly.

While it's no longer banned in the U.S., it's still not something you find at your local grocery. Asian food markets or large farmers markers that carry a diverse selection of fruits are the most likely places to carry fresh mangosteen. Today, mangosteen grown in Asia has to be irradiated to rid the fruit of Asian fruit flies before it's imported to the U.S. This extra step contributes to a high price tag. If you have no luck finding it fresh, look for it in canned, preserved or beverage form.

Now That's Cool
Despite its name, the mangosteen (Garcinia mangostana) has no relationship (botanically or tastewise) to the mango (Mangifera indica). 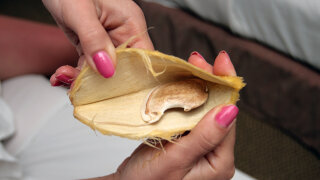 How to Plant a Mango Seed 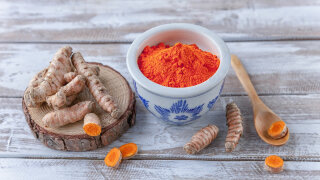 6 Anti-inflammatory Foods You Should Be Eating 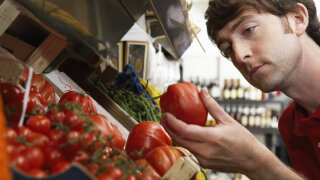 What's the difference between a fruit and a vegetable? 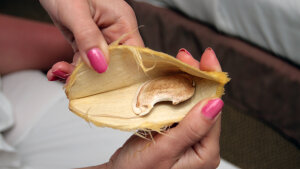 How to Plant a Mango Seed

6 Anti-inflammatory Foods You Should Be Eating