What's the average cost of a Thanksgiving meal? 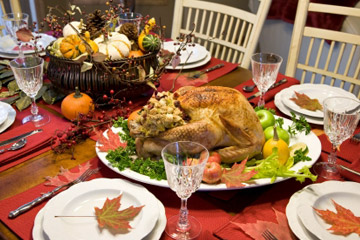 The traditional Thanksgiving menu in the United States generally consists of a few staple items and then variations of dishes, depending on the family traditions that are observed. You can usually count on turkey and stuffing, cranberry sauce and couple of vegetable casseroles of some kind. Desserts are also a part of the meal, with pumpkin pie making its rounds on many dinner tables. You'd think that a traditional meal with all the trimmings would be one of the more expensive home-cooked meals, but you'd be surprised at how little a Thanksgiving meal can cost per person.

The turkey is always the biggest expense of a Thanksgiving meal. The price of the turkey depends on the overall economy because of fluctuating costs like feed and fuel. When gas is up and the economy is down, you'll pay a bit more for your bird. In 2007, a 16-pound (7.2-kilogram) turkey averaged $17.63, but jumped to $19.09 in 2008 [source: Sherman]. That's about $1.20 per pound on average for 2008. If you're feeding a large group and you want some leftovers for soup and sandwiches, you may end up spending as much as $35 for your turkey alone. The good news is that the other staples are pretty inexpensive. Potatoes for mashing and vegetables for your casseroles are all very inexpensive, and casseroles are a great way to feed a lot of people for little money. The same goes for cranberry sauce.

Save some money by buying some of your items frozen, like cranberries or green beans. Turkeys are also cheaper frozen than fresh. You should also keep an eye out for ingredients that are on sale. Most grocery stores have a section dedicated to Thanksgiving with many of the items you need at a reduced price. Like with any food, look for store brands to replace the more expensive brand name counterparts. Many times these are the exact same item from the same company, but in different packaging.

Each year after Thanksgiving, there are companies that conduct surveys in the United States to determine the costs of the average meal. They generally figure the costs for a meal that feeds 10 people, and the menu includes turkey and the trimmings -- peas, potatoes, pumpkin pie, stuffing, cranberries, rolls, and staple items like butter and milk. They also don't factor in any leftover food. The American Farm Bureau Association found that the average cost of a Thanksgiving meal in 2008 for 10 people was $44.61, about $4.50 per person [source: Sherman]. Of course, this is an average, so spending on fresh ingredients, organics, extra food for leftovers and additional items like alcohol can make your meal significantly more expensive. It all depends on your tastes and traditions.

If you adjust for inflation, Thanksgiving dinner is actually cheaper now than it was in 1988 [source: Sherman].