Fast food is easy, convenient and perfect for the person on the go. Who doesn't love getting a hot, tasty meal delivered right to their door? Check out these mouth-watering fast food pictures. 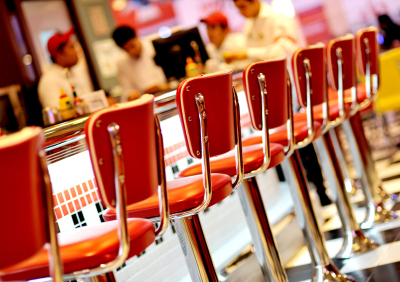 The fast food industry owes its booming success to the drive-in restaurant, which originated in southern California in the 1940s. Getting hot, tasty meals delivered to the customers quickly was the perfect recipe for success. 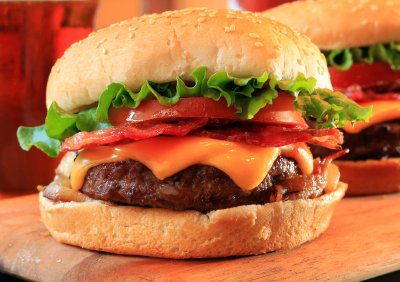 Cheeseburgers and hamburgers are the bedrock of fast food. In fact, McDonald's even offers a training program at Hamburger University, where students earn degrees in Hamburgerology to fast-track their careers in restaurant management, mid-management and executive development. 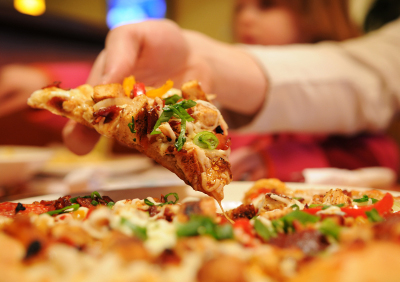 Pizza is one of the most popular fast foods in the United States. In fact, Americans eat about 23 pounds of pizza per person each year, contributing to the pizza industry's jaw-dropping $37 billion in annual revenue. That's fast food amore! 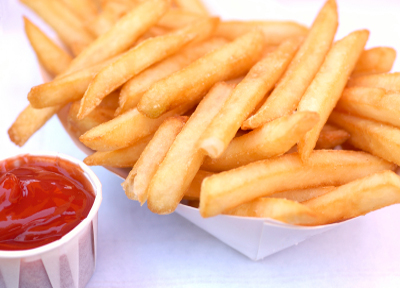 Whether you like steak fries, shoestring potatoes or even curly fries, it's hard to pass up a deep-fried, salted wedge of potato. The French refer to these delicacies as pommes frites, and Americans owe a big thank you to Thomas Jefferson for bringing them stateside after tasting them in Paris. 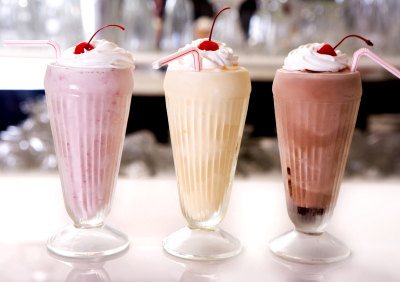 When the mercury rises, there's nothing quite like a frothy milkshake to cool you off. While milkshakes from your favorite fast food joint may be delicious, they're also incredibly artificial. It takes nearly 50 different chemicals to produce the artificial strawberry flavoring in your favorite pink drink. 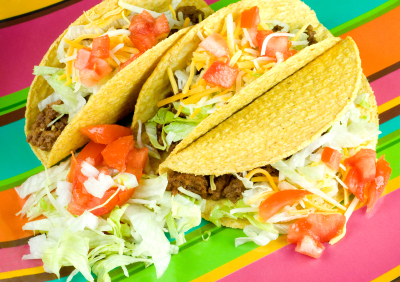 When Taco Bell opened for business in the 1950s, it was the only fast food restaurant specializing in Mexican fare. Today, the variety of hamburger joints still outnumber the South of the Border outpost, and Taco Bell has parlayed its uniqueness into a smash advertising campaign. Encouraging people to "think outside the bun" has led to massive amount of tacos, burritos and nachos sold. 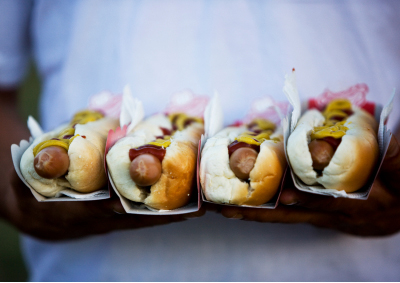 A sizzling hot dog tucked into a doughy white bun and topped with relish, ketchup and mustard can't be beat. Plus, this fast food treat is incredibly afforable. But what makes hot dogs so easy on the wallet isn't so appealing. Food fillers like cereal binders and extenders (which are made from fat, blood and internal organs) go a long way in hot dog production -- getting you more for your money but less for your overall health. 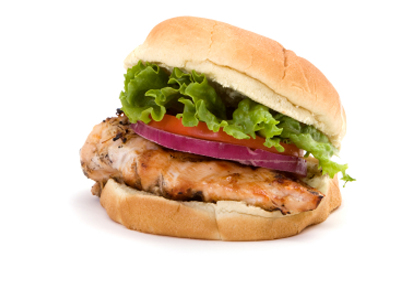 The grilled chicken sandwich is the lesser of evils for health-conscious eaters ordering off a fast-food menu. To round out your healthy meal, skip the french fries and opt for a fruit cup or a side salad. Just go easy on that creamy ranch dressing. 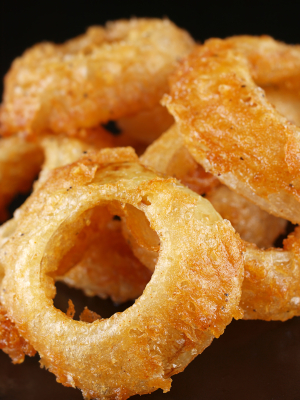 Whose idea was it to slice onions, dip them in batter and deep-fry them? We're not sure, but they're awfully tasty whether you like them with ketchup or a tangy chipotle sauce. Just don't think you're virtuous by subbing onion rings for fries -- even though there's a vegetable hidden underneath that breading, it's not doing you a whole lot of good. 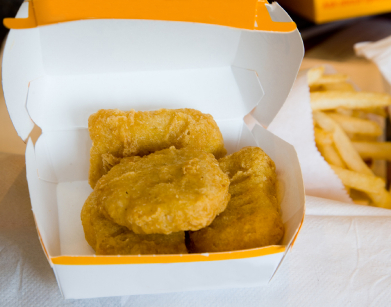 Your kids might not eat the chicken breast you serve for weeknight dinners, but you can bet they'll scarf down chicken nuggets. These flavorful, compact niblets of poultry are incredibly popular fast-food menu items. In 2007, McDonald's bought nearly 663 million pounds of chicken, which the restaurant used for nuggets, chicken sandwiches, salads and snack wraps. 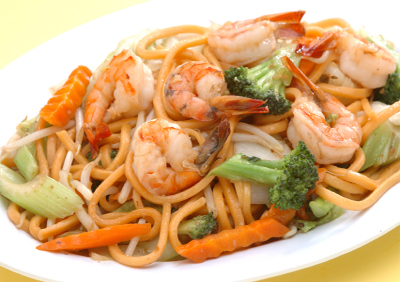 Those little red-and-white pails that are synonymous with Chinese takeout are filled with lots of good stuff. Fried rice, dumplings, sesame chicken -- not to mention monosodium glutamate (MSG). A lot of fast food restaurants (not just the ones that specialize in Asian cuisine) add MSG to their food to enhance flavor. Some people have an aversion to the stuff, and experts warn not to eat too much on an empty stomach and to avoid it if you suffer from asthma. 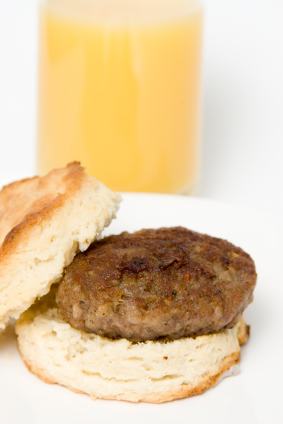 Buttermilk biscuits usually suggest homemade goodness, but fast food chains roll out these flaky, buttery biscuits quicker than your grandmother can pick up her rolling pin. We've already talked about fillers in hot dogs, and sausage patties are stuffed with many of the same industrial ingredients. What's more, these breakfast bites pack a lot of calories and fat. A sausage biscuit from Hardee's contains 530 calories and 38 grams of fat. 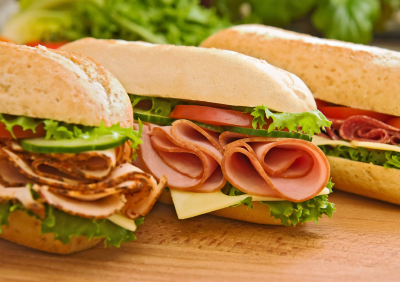 Subway and other sub sandwich fast food chains have benefited from increased awareness about nutrition and healthy lifestyles. While they've always offered lower-calorie options than burger joints, many consumers have opted for fried fare instead of cold cuts. Now, the masses are flocking to get their 12 inches of meat, cheese and veggies on bakery-soft bread. Skip the potato chips, and your arteries will thank you. 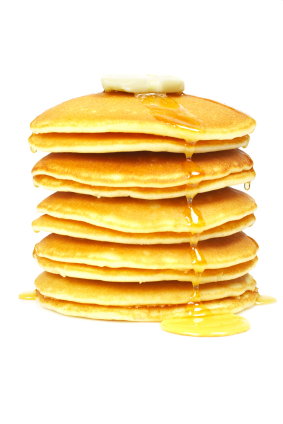 Fresh off the griddle, piping-hot pancakes with butter and maple syrup are the kind of fast food breakfast that you eat in the restaurant or at your desk -- not in your car. And if you use a light hand with the syrup and butter, this isn't a bad choise, waistline-wise: A plain stack of flapjacks at McDonald's has 350 calories and 9 grams of fat. 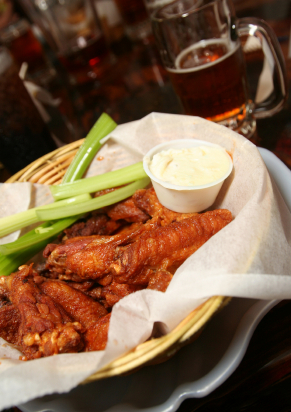 Chicken wings and sports go together like salt and pepper. You can get them bold and spicy or tame and sweet. They even come with a side of veggies -- celery sticks and blue cheese dressing are necessary accompaniments to wings.