Why aren't peanuts classified as nuts? 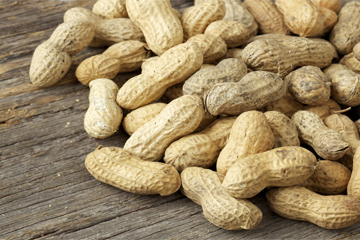 If a tasty bag of peanuts is one of your favorite go-to items for a healthier snack, take note: That's actually not a nut you're munching on. While they sport the "nut" name, peanuts are actually a legume, making them a member of the family of plant-based items that includes lentils, beans and soybeans.

True to the legume family, a peanut is composed of an edible seed that grows inside a pod. One reason you may not readily associate peanuts with those more familiar legumes is that you don't eat the peanut's dry and brittle pod, like you do with many legumes -- the green bean, for instance.

Another difference lies in where the nuts grow. You won't find a peanut growing on a tree, as you would with almonds or cashews. Called forage legumes, peanut pods grow under the soil, originating from a bush-like, creeping plant. When they're ripe and ready to harvest, they're pulled up, similar to a carrot or potato. Perhaps the nickname "ground nut" is a more descriptive title for this tasty legume [source: Asef].

Because peanuts grow underground, they can become contaminated with a strain of mold called aflatoxin, which can cause illness. In the United States, the Department of Agriculture carefully monitors peanut production and halts the process for any peanuts with unsafe levels of aflatoxin [source: Grunert].

Already familiar to those who follow a vegetarian diet, items in the legume family provide a good source of concentrated, nonanimal protein. Peanuts contain more protein than most true nuts, packing in 7.3 grams per ounce. They're also rich in a wide array of nutrients, including folate, vitamins E and B6, zinc, calcium, iron and more [source: The Peanut Institute].

Regardless of what they're called or where they grow, peanuts have become an American staple. According to The Peanut Institute, peanuts and peanut butter compose 67 percent of all U.S. nut consumption. The peanut's versatility helps explain this overwhelming popularity -- it can be roasted and eaten as a snack, pureed into peanut butter, tossed into stir-fries or added to baked goods.

So next time you're munching on some peanuts and want to share knowledge about your favorite legume ... hey, go nuts.