Why Does Lettuce in a Bag Stay Fresh Longer Than a Head of Lettuce? 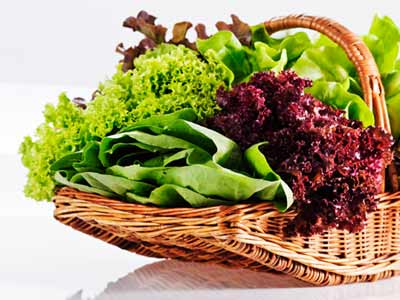 Many of the foods that you buy wrapped in plastic use what's called modified atmosphere packaging, or MAP. The package is filled with a mix of gases that are beneficial to the food. Most foods do better if they are stored away from oxygen. Also, many microorganisms have a hard time with high concentrations of CO2 (just like people -- see How does dry ice work?). So eliminating oxygen and adding C02 is very common in MAP.

The amount of time MAP can add to shelf life can be amazing. The shelf life of meat can go from three to 21 days, cheese from seven to 180 days, and fresh pasta from three to 60 days [ref]! That's not bad when you consider that the cost of adding the gas is practically nothing. Shelf-life extension often lowers the cost of a product by reducing spoilage, and also opens up long-distance import/export options. It also can extend the seasons of certain fruits and vegetables.

In the case of lettuce in a bag, the modified atmosphere does two things. First, it changes the way the green leaves behave. The green leaves are still alive, even after you pick the lettuce, and you want to keep them alive as long as possible by changing their behavior. Second, it discourages bacteria.

According to the magazine Practical Hydroponics & Greenhouses, atmospheres with high levels of carbon dioxide and low levels of oxygen can:

That collection of features is what keeps the lettuce fresh longer. There are no chemicals involved!

Is chocolate addictive?
I Scream, You Scream, We All Scream for Instant Carbonated Ice Cream
The Fascinating History of Lemonade