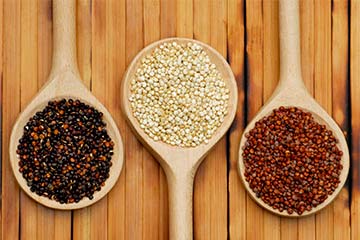 Quinoa comes in many colors, most commonly white, red and black.
© Pfeiffer, J./Corbis

For all the grief I give my kids about being picky eaters, I must admit that I can be bit of a hypocrite. Although I do enjoy a wide range of foods, I tend to be a very slow adopter of unusual or seemingly newfangled food trends. That's probably why I had to see the word "quinoa" in print roughly a zillion times, plus hear my friends crow about its awesomeness for months on end before I took the plunge and gave it a try ... and I am certainly happy that I did.

Although it seems like quinoa (ignore your instincts and pronounce it this way: keen-wah) just burst on the scene recently, it's actually been grown and cultivated for more than 5,000 years. In fact, it's known as an "ancient grain" because it has stayed virtually the same over this impressive span of time [source: Ware]. There are many incarnations of quinoa, but the most commonly available for purchase, and therefore consumed, are red, white and black varieties. Traditionally, it has been grown in South America, high in the Andes mountain range, but its status as the reigning Homecoming King of the nutritional world has inspired growers in North America to follow suit. This increase in production has become necessary in order to meet demand and keep prices down to a level that allows people to afford the product, which trends at a higher price point than plain old brown rice [source: Bland].

So, what is quinoa, anyway? The answer isn't as straightforward as saying for example, that milk belongs to the dairy food group. In terms of botany, quinoa is classified as a pseudo-cereal. Quinoa seeds are harvested from the goosefoot plant (a weedy-looking plant with purple blooms), and are nutritionally comparable to grains and regular old cereals. Despite this classification, quinoa is actually labeled a whole grain from a nutritional standpoint. This is because whole grains feature the whole, uncompromised grain seed, for which quinoa totally fits the bill [source: Ware]. Still, the fact remains that it is neither a grain nor a cereal, and is actually closer in relation to veggies like spinach and beets [source: Runyon]. Confusing as that may be, the nutritional awesomeness that quinoa has to offer is easy enough to comprehend and love. 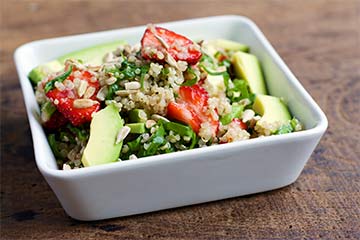 By now you know that quinoa is a pseudo-cereal that does double-duty as a grain (think of it as the Bruce Wayne/Batman of the nutrition world). You might not realize that it also packs impressive levels of protein, which is highly unusual for a plant-based product. In fact, one cup of quinoa generally features around 6 to 8 grams of protein [sources: Oaklander, Ware]. It's also one of precious few plant-based options that offer complete proteins, and its nutritional ante is upped by the fact that it has a high protein-to-carbohydrate ratio [source: Whole Grains Council].

"Protein burns calories and helps you feel satisfied longer," explains Caroline Kaufman, a registered dietitian and spokesperson for the California Dietetic Association, adding that quinoa's status as a complete protein allows it to provide all of the essential amino acids our bodies need to not only survive, but also thrive. "Your body takes the amino acids and turns them into proteins that do important functions like helping you break down food, grow and repair tissue," says Kaufman. These essential amino acids, according to Kaufman, cannot be made by the human body, which is why we turn to food sources like quinoa for them. Finding complete proteins is, "unusual in plant foods," says Kaufman, adding that meat products are more common sources.

Protein pluses aside, plain, dry quinoa will run you about 160 calories per serving, and includes no sugar, sodium or cholesterol [source: Ware]. It also features impressive levels of fiber, magnesium, folate and even immune-boosting zinc [source: Oaklander]. Compared with other whole grains, quinoa has the highest level of potassium, which is excellent at controlling blood pressure, according to Kaufman.

Quinoa's status as naturally gluten-free has been a major perk for people who are sensitive to gluten or can't consume it at all, such as those with celiac disease. (Gluten is found in pasta, couscous, bread and other wheat-based products.) In fact, the gluten-free movement, coupled with increased interest in plant-based diets, is credited with quinoa's heightened popularity in recent years. "Quinoa is uniquely great because it has protein and iron and fits nicely into plant-based diets," says Kaufman, adding that a lot of other gluten-free foods are processed to the hilt, and actually are nutrient-poor, unlike quinoa.

Not surprisingly, quinoa has come to be hailed as one a nutritional superstar. "It's certainly considered by a lot of people as a superfood, like berries and nuts," says Kaufman.

Tips for Cooking and Eating Quinoa

Daunting as it can be to prepare a new type of food, cooking quinoa couldn't be easier to master. First, grab a bag at your local grocer, since quinoa is available at virtually all chains nowadays. "White quinoa is softer, milder and fluffier," says Kaufman, whose personal preference is for tri-color quinoa, which includes white, red and black. "It's the prettiest and combines the flavor and texture nuances of all three."

The only mildly bothersome aspect of quinoa cooking lies in the prep work. Kaufman strongly recommends rinsing quinoa thoroughly before beginning, even if your bag says it is prewashed. This is because quinoa naturally has a bitter coating called sapponin, which will affect the outcome of the dish. Because the seeds are pretty tiny, I've found it easiest to use a fine skimmer/strainer spoon to get the job done. Rinse until the water runs clear and you're good to go!

Kaufman prefers a rice cooker for her quinoa, but I've always used a small pot, and have enjoyed great results. The ideal cooking ratio is one part quinoa to two parts water. Be mindful that one seemingly tiny cup of the dry stuff will swell to three cups of cooked quinoa. Once the liquid and quinoa are combined, just cook it the same way that you would rice. Bring the pot to boil, then reduce heat to low. Cover and simmer until almost all of the liquid has been absorbed, and the seed spirals are prominent (sounds weird, but I promise you'll know what I mean when you see it). Typically, the process from start to finish is 15 to 20 minutes, and requires little elbow grease.

Quinoa cooked plain is great mixed in or on the side of practically any main course, but there are ways to punch it up. Kaufman recommends adding extra flavor by incorporating chicken or vegetable broth during the cooking process, or including smashed garlic or herbs for panache. In more elaborate dishes, you can substitute it for any kind of grain, for instance a quinoa salad for a rice salad. Veggie burgers and meatballs also benefit from the added nutritional punch that quinoa can provide in place of standard fillers like breadcrumbs. I had a quinoa burger recently and was surprised to discover that I actually preferred it to the regular red meat variety. Who woulda thought?

Grow Your Own Quinoa

Are you so smitten with quinoa that you want a more involved relationship? Perhaps it's time to try your hand at growing your own at home! Milder climates that don't exceed 90 degrees Fahrenheit (32 degrees Celsius) in the summer are ideal, so Floridians might want to stick to the store-bought variety [source: Backyard Gardening Blog]. And if you grow it yourself, you can use the leaves in a salad!

Challenges of Stocking and Producing Quinoa 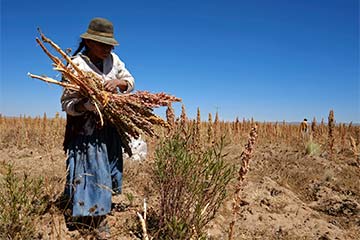 A woman harvests quinoa plants on a field in Bolivia.
© DAVID MERCADO/Reuters/Corbis

Growing, harvesting and selling quinoa seems like a no-brainer, right? After all, the crop has enjoyed major success over the years, notably beginning in 2007 when the United States imported 7.3 million pounds (3 million kilograms) of the good stuff. Fast-forward to 2012, when the U.S. placed 57.6 million pounds' (25 million kilograms') worth of orders, and it's certainly obvious that demand increased exponentially [source: DePillis]. There's a flip side to every coin, though and quinoa, despite its delicious nutritional goodness, is no exception.

Although the nutritional boons of quinoa are pretty much impossible to discredit, the growing and manufacturing process has been criticized. First, there wasn't enough quinoa available to meet demand. Even after planting and growing ramped up, prices continued to rise, forcing some businesses to stop ordering quinoa, lest it negatively impact their bottom lines [source: DePillis]. The jump in cost wasn't a tiny one, either. For many years 1 metric ton (1.1 tons) of quinoa ran a buyer about $500, but by 2010 that figure increased to a whopping $1,300 per metric ton [source: Richardson].

Although greater demand for the product has helped South American farmers enjoy a serious uptick in pay, the threat also looms that other producers around the world will wind up taking away customers, leaving those who've been making it for millennia in quite a lurch [source: DePillis]. Although quinoa-producing areas are making more money than before, residents of some of these areas are still considered to be extremely malnourished. How could this possibly be the case? After all, they produce a nutritional superstar, quite literally in their own backyards. The simple answer is that quinoa is a pricey product, so they can't afford to eat it. Some choose instead to sell their own supplies at at a profit and then purchase cheaper alternatives [source: Richardson].

As with any manufacturing, business or related industry, questions surrounding quinoa's growth and production is complex. For every critic, there's probably at least one person singing exactly the opposite tune. But none of that takes away from the fact that quinoa is versatile and great for you.

I love plain old quinoa, but even if it's not your cup of tea there are so many ways to get this superfood into your diet. Breakfast bars – yum! Quinoa burgers – double yum! So give this grain-that's-not-a-grain a try. What have you got to lose?