by Jeremy Glass
Next

Try a free puzzle of this image!

The beautiful red pistachio is seemingly a thing of the past, but do you know the story of the politics behind the color change? Richard T. Nowitz/Getty Images

Nostalgia is a heck of a drug. For those of us old enough to remember, red pistachios played a major part in our childhood memories. Times were simpler back then: People called friends from landline phones, they balanced their checkbooks and ate pistachios that dyed their fingers a vibrant red. As kids, we accepted this bizarre side effect from eating a nut (that’s actually a member of the cashew family) and never questioned the color. Now, on Feb. 26, National Pistachio Day, it’s time to revisit this relic of the past and answer two burning questions: Why were pistachios dyed red in the first place, and why aren’t red pistachios around anymore?!

The History of the Red Pistachio

It all starts with a Syrian pistachio importer by the name of Zaloom who supposedly dyed his pistachios red to differentiate his product from that of his competitors and hide any minor imperfections from harvesting. Let’s back up. The pistachio is believed to be indigenous to the Middle East, specifically Iran, and was widely cultivated from Afghanistan to the Mediterranean region, as well as in California. While Persian chef and writer Najmieh Batmanglij insists Iranian’s don’t specifically dye their pistachios (the dyed ones likely made their way to the U.S. from Syria), the nuts are vital to Middle Eastern culture.

Up until the 1970s, the majority of America’s pistachios came from abroad; most hailing from Iran. Zaloom’s method of using his red dye to make his nuts stand out eventually became the identifying mark of Middle Eastern pistachios. Then, in 1979 came the Iranian Hostage Crisis in which 52 American diplomats and citizens were held hostage in Iran for 444 days. Needless to say, tensions between the two nations were extremely high during this time, deeply affecting how the U.S. viewed Iran while undermining Jimmy Carter’s conduct of foreign policy.

Carter did what any president in a tight spot would do and imposed a number of sanctions on Iran just after the crisis began. Carter began by cutting off sales of Iranian oil and freeing all Iranian assets. On April 7, 1980, frustrated by the ineffectual outcome of the sanctions, Carter announced he would be taking drastic measures by cutting off diplomatic ties with Iran and embargoing all imports from the Middle Eastern country. His embargo against Iranian imports resulted in what was essentially an embargo on the area’s vibrant red pistachios, leaving the fingers of pistachio-loving Americans everywhere clean.

So, where do pistachios come from now? Short answer: California. California grows about 98 percent of pistachios sold in the U.S., using an automated process ensures little to no colorful imperfections on the shell.

“The seeds for all pistachios grown in America (now the largest producer of pistachios, surpassing Iran and Turkey) was originally brought to America by the department of agriculture from Kerman, Iran,” adds Najmieh. “The word ‘pistachio’ comes from the Persian word ‘pesteh’ via the Latin word ‘pista.’ Ancient Greeks referred to Iranians as ‘pistachio eaters.’”

California produced around 4.5 million pounds of pistachios in 1977 — a number that grew by 20 times only 20 years later. Now, California is home to 99 percent of the nation's pistachio orchards, making it a $3.6 billion industry. Coming in at second and third in the pistachio-growers world are Arizona and New Mexico, with an economic impact of $13 million and $3.1 million, respectively.

When you’re watching movies like "The Naked Gun" and come upon that brilliant scene where Frank's and Ed’s mouths are dyed red from eating pistachios in the car, remember where those pistachios came from and why you no longer see them today.

Pistachios did not grow in California until 1854, where it was introduced as a “garden tree.” 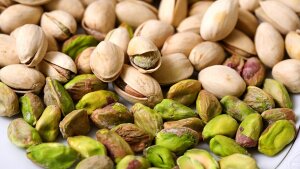 A Portrait of Jimmy Carter, America's Oldest Living President Ever 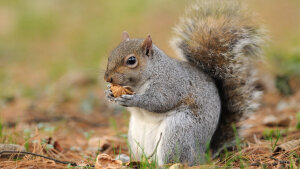 How Do Squirrels Organize Their Nuts?