What Makes a Whiskey Scotch Whisky?

Browse the article What Makes a Whiskey Scotch Whisky? 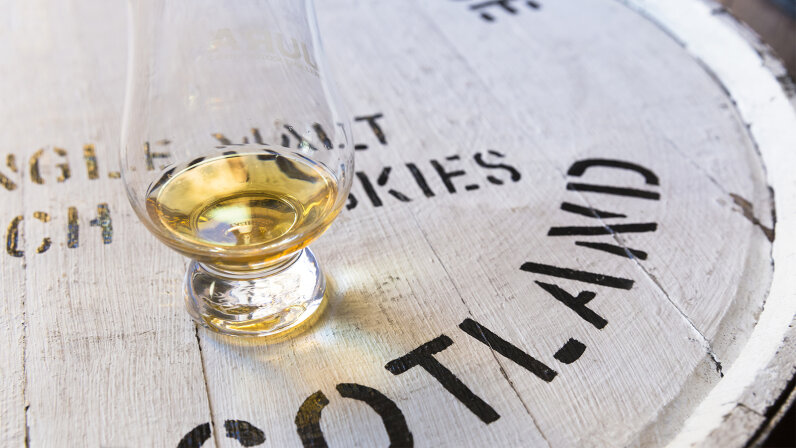 Bourbon whiskey is American whiskey, but true scotch whisky is made in Scotland. FUTURE LIGHT/Getty Images

What would life be without the simple creature comforts that get us through the week. Good friends, trashy TV, comfy slippers and a nice glass of whiskey. For those of us who can pour a couple of ounces of Fireball into a glass and call it day, we commend you. However, there are some of us who require a bit more bang for our buck when sipping mankind's finest vice. There's a scotch-drinker nestled within all of us — some of us just don't know it yet.

Despite the inherent ease of drinking the stuff, a lot has to happen to a bottle of whiskey before it can legally be classified as such. Similar to bourbon in color, alcohol content and occasionally taste, scotch whisky (without the "e") is in a category of its own and cannot be labeled as bourbon. So, what makes what you're drinking scotch and how does it get that way?

"Scotch and bourbon are both whiskeys," says Scotch Brand Ambassador, Greg King. "Whiskey is kind of the umbrella term like 'wine' or 'beer.' You can have bourbon whiskey — which is American whiskey — or you can have scotch whisky made in Scotland." Greg explains that a lot of what makes a whisky scotch as opposed to bourbon comes down to the legalities of where it's from and how it's made. Scotch has been around for hundreds of years, with the very first mention of the spirit appearing in the "Exchequer Rolls" nearly 500 years ago, in 1494.

For a whiskey to be classified as bourbon, it has to be made in the U.S. and contain at least 51 percent corn. To be a bourbon, whiskey must also be aged in new, charred oak barrels. Unlike scotch, bourbon is made from what's known as a "mash bill" — a mixture of grains used in the production of whiskey. Scotch, on the other hand, is made from malted barley that has been matured in oak barrels for a minimum of three years.

Tried and true scotch hails from — where else — Scotland. As of 2019, there were 133 operating Scotch whisky distilleries across Scotland, with notable brands like The GlenDronach, Glenfiddich, The Glenlivet, Macallan and Glenglassaugh, making their way around the world and into tumblers all over the world.

For the whiskey drinker with a palette for spirits, tasting the difference between scotch and bourbon is easy. Bourbon tends to be on the sweeter side, while scotch tastes more smokey.

Those less experienced with whiskeys may have a more difficult time at first — especially if they're drinking a particularly smokey bottle of scotch like BenRiach 10-year single malt.

That taste actually comes from the malting process, in which the barley grain is exposed to a pungent peaty smoke during the drying process. Laphroaig actually dries its malt over a peat fire for about 18 hours, allowing the dried barley to absorb the smoke, giving it that distinct taste.

Of course, there are those bottles of scotch considered must-haves within the whisky community; these come from distilleries like Ardbeg, The Balvenie and Laphroaig. What makes these bottles so unique is the "peaty" flavor that comes through with each sip. Scottish peat is formed from the natural decay (decomposition) of plant material unique to Scotland's peatlands, bogs, mires, moors or muskegs.

Like wines from France or California, a connoisseur might be able to pick where a scotch comes from depending on the taste. The Highlands up north produces a more full-bodied scotch with a peaty, smokey taste; a smoother, sweeter scotch is produced in the lowlands; and Speyside scotch comes from the northeast — a region King describes as the "Napa Valley of Scotland." Because of the lush soil and perfect environmental conditions, the highest concentration of Scotland's distilleries are actually based in the Speyside region.

There are, of course, exceptions to the "all scotch comes from Scotland" rule. In 1918, Masataka Taketsuru went to Scotland with one mission in mind — to learn how to make scotch. After enrolling in the University of Glasgow, Taketsuru took chemistry courses and apprenticed at a number of scotch distilleries before mastering the art of scotch-making. In 1940, the first bottle of Nikka Whisky hit the market as the first Japanese scotch.

Along with Nikka, there are scotches — or, at least, iterations of scotches — from Taiwan, India, Sweden, and America. Despite the distilling method, these bottles cannot be classified as scotches, but can be classified as "single malts" as long as they're a malt whiskey from a single distillery.

Now That's Interesting
In 2011, Ardbeg Distillery launched a vial of scotch into space to see how it affected the taste of their product. When the sample returned, Ardbeg's director of distilling and whisky creation described the sample as having notes of "antiseptic smoke, rubber and smoked fish, along with a curious, perfumed note, like violet or cassis, and powerful woody tones, leading to a meaty aroma." Yum.