Sliced, diced or whole tomatoes - which should you use when? 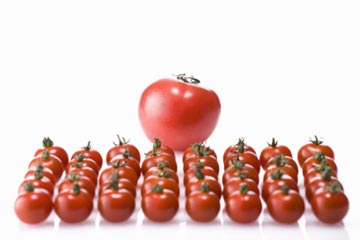 There's a whole army of tomato options out there -- which one to chose? See pictures of international tomato recipes.
Indeed/Stockbyte/Getty Images

Now ubiquitous in the produce section of the grocery store -- as well as in many other aisles -- tomatoes were not always such a popular purchase. For years, people in America shunned them because they believed tomatoes were poisonous since they're members of the same taxonomical family as deadly nightshade. But gradually public opinion swayed and today, tomatoes are a major consumer vegetable crop -- No. 2 behind potatoes [source: Allen].

This achievement is particularly impressive given the fact that tomatoes aren't even technically vegetables, but rather fruits. We have the United States Supreme Court to thank for that little mix-up -- they ruled in 1893 that although tomatoes are a fruit botanically speaking, for taxation purposes they would heretofore be considered a vegetable. Scientifically, of course, tomatoes remain firmly rooted in the fruit camp. It's only when dealing with U.S. tariffs and culinary classifications that things get complicated.

Tomatoes are believed to have originated somewhere in the Andes of South America, although apparently they weren't domesticated until they reached Central America [source: Allen]. It's likely the first efforts of tomato cultivation took place in what is now Mexico. Europeans were quick to bring them across the pond but the speed with which tomatoes were adopted into diets varied among different regions around the continent. For example, Italians were early fans, Brits quite skeptical. Despite the fact that tomatoes were native to the New World, they didn't grow really popular in the United States until the 1800s.

Tomatoes are wonderfully versatile when it comes to preparation. They can be stewed, stuffed, baked, broiled, pureed, pickled, deviled, glazed, grilled and fried. With all those choices, it can be a challenge deciding which style of tomatoes to buy. Fresh whole tomatoes? Canned diced tomatoes? Should they be chopped, sliced, crushed, sun-dried, fire-roasted or sauced? Do you want to buy them as is and prepare them yourself, or have the processing already taken care of? There are many possibilities out there, so get some tips on the next page. 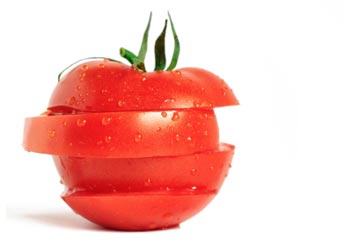 Slice n' dice or chop away? Shapely and fresh or canned and concentrated? Pleasantly pureed or perfectly pasted? It doesn't have to be a world of tough tomato choices -- just experiment!
©iStockphoto.com/Anelina

Really, when it comes to deciding what to grab at the grocery store, it all depends on what you're making, and -- of course -- on your personal preference. For example, if you're a person who's picky about texture, maybe you prefer crushed tomatoes to peeled tomatoes and that's a pretty easy swap to make. Tomato sauce, tomato paste and tomato puree all have different textures, too, so you may fancy the feel of one above the other.

If you want to make delicious stuffed tomatoes, you'll obviously need to start with whole ones and cut the top portions of the tomatoes off. If you want to put some tomato on a sandwich, however, you'd look pretty silly using a tomato in its entirety or dicing it up and trying to keep all the bits from falling out. Slicing it is probably the best way to go in the sandwich arena. While preparing Pico de gallo, you may want to finely chop your tomatoes, but for chunky salsa, using diced ones works just fine.

Ripeness is another factor you'll want to keep in mind. Homemade ketchup is more easily made with ripe, mushy tomatoes, but stuffed tomatoes should be nice and firm. There's also the matter of cooked versus raw tomatoes. By cooking tomatoes, you seriously up the level of great nutrients like lycopene, although you do sacrifice a bit of some of the others, such as vitamin C. This isn't too big of a deal though, since tomatoes come loaded with vitamin C in the first place. One cup of raw cherry tomatoes, for example, has 32 percent of the Percent Daily Value recommended (although it's important to keep in mind that's just an average; people's need for vitamin C varies) [source: Nutrition Data]. Also, canned tomato products generally count like cooked tomatoes because they're heated during processing.

On the next page is a bunch more information prone to please foodies looking to satisfy their hunger for knowledge.