Why would you put a smoothie in a bowl? 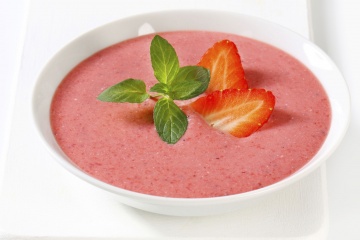 Healthy food fads come and go. Smoothies, however, stand the test of time. The first smoothies appeared on the West Coast in the 1930s as a blended fruit drink. With the introduction of the home blender in the 1940s, smoothies became even more popular. The macrobiotic trend of the 1960s gave smoothies their association with health food, and in the 1970s smoothie chains started adding vitamins and supplements.

By the 1990s and 2000s, smoothies could be anything and everything. From wheatgrass smoothies at the gym to a full-fat frozen coffee smoothie dessert drink, smoothies all have one thing in common -- they're served in a cup with a straw.

But in 2014, yet another smoothie trend has emerged. We're taking the smoothie out of the cup, putting it in a bowl, and eating it with a spoon. These smoothies in a bowl can be sweet or savory. Which raises the question -- aren't they just a dessert or gazpacho, then? Not to smoothie connoisseurs.

Let's take a look at the new smoothie trend and why you wouldn't be able to sip these smoothies out of a straw.

The first, and most obvious, difference between old-style smoothies and smoothie bowls is that because a straw no longer limits you, you can make your smoothie as thick as you want. You can add frozen fruit or ice to give it the consistency of a frozen dessert. You can top it with berries, granola, nuts or muesli.

Instead of blending everything down to a drinkable mixture, smoothie enthusiasts can make their basic smoothie as usual, then mix in healthy toppings to make the smoothie seem more like a meal. This can give you more fiber, which helps you feel full. Of course, you need to be careful you don't fall into the calorie or portion trap. Adding calorie-rich ingredients like nuts, peanut butter or granola can make calorie content skyrocket quickly. And keep an eye on the size of your bowl, too.

It may sound funny, but another reason for smoothie bowls' rise in popularity is social media. Search the hashtag #smoothiebowl on Instagram and you'll find hundreds of photos. Some are veritable works of art. With the bowl filled with a brightly colored smoothie, then fruit and nuts decoratively layered and placed on the top, the competition seems fierce over who can create the loveliest edible.

Smoothie bowls may not be a groundbreaking new food trend, but if you find yourself getting tired of the same old kale smoothie every day, it might be a fun thing to try. Or photograph.

Why is there a gluten-free backlash?
What's All the Buzz About Ezekiel Bread?
Ruby Chocolate: This New Confection Is Pink Perfection