Why do children have a sweet tooth? 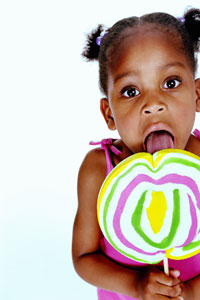 Sugary snacks seem to be inescapable. The bank drive-through, doctor's office and many other hot spots are rife with lollipops and other sweets, tantalizing children and often frustrating parents. Children seem to be targets of the sugary-food industry. A recent study found that 34 percent of advertisements geared toward children and teens depicted candy and other sugar-laden snacks [source: Kaiser Family Foundation]. Researchers aren't sure why many children are so drawn to sweets, but there are a few interesting theories.

Survival of the Sweetest

Many researchers believe that Mother Nature predisposes babies to sweets to make the flavor of breast milk more appealing, thus encouraging survival [source: Snyder Sachs]. Expectant and nursing mothers are encouraged to enjoy a wide variety of healthy snacks and keep sweets at a minimum. This is because the foods they consume influence the flavor of amniotic fluid in expectant mothers and breast milk in nursing mothers. Consequently, experts believe that even fetuses and infants of mothers who consume a lot of sweets develop a sweet tooth themselves -- which could last the rest of their lives.

One study found that rats that were fed diets high in sugar developed chemical dependencies on the substance. The study surmised that sugar consumption triggers the release of the neurotransmitter dopamine, which causes a high of sorts. Over time, the rats became more and more addicted to sugar to provide those good feelings [source: Victory].

Yet another study found that a specific genetic predisposition to sweets might cause some people to crave them more than others. Study participants turned in daily food consumption records. The participants whose blood samples showed a particular form of the gene GLUT2 recorded consistently higher levels of daily sugar intake, indicating that they are more prone to eat sugary snacks than other participants with different genetic tendencies [source: Gramza].

Much Ado About Sugar

Sweets have garnered a bum rap over the years for causing a host of behavioral and physical problems. However, multiple studies have determined that sugar consumption doesn't cause hyperactivity. Rather, blood sugar spikes are to blame, and they can actually be controlled [source: Victory]. What's more, sweets often aren't the culprit in many cases of tooth decay. Pretty much any type of food particle (sugar or not) that stays in the mouth for long periods of time allows bacteria to grow and multiply, which, in turn, promotes decay [source: Cohen].

To some extent, sweets have been fingered for the rising rate of childhood obesity. Recent studies have shown that the prevalence of obesity has increased in all age groups. However, children who are obese are that much more likely to turn into obese adults [source: CDC]. Despite these unfortunate truths, many physicians agree that the real problems are inactivity and the excessive consumption of unhealthy foods.

Experts encourage parents to teach children to make healthy choices from the very beginning. You can make candy and cookies once-in-a-while treats, limit fruit juice consumption and stay physically active with your kids. As with most things, moderation seems to be the key to the enjoyment of sweet snacks for children and adults alike.

How Junk Food Works
Why does ginger settle an upset stomach?
Food Fillers 101