Can You Microwave a Steak to a Perfect Medium-rare?

by Christopher Hassiotis May 11, 2018
You can grill steak. Broil it in the oven. Sear it on the stovetop. But a microwave? Really? pa_YON/Moment/Getty Images

For convenience in cooking, a microwave oven can be tough to beat. The common kitchen appliance, introduced for residential use in the 1950s, can cut down on the time and the electricity necessary to cook or reheat food. And lately we seem to be unduly focused on them. (See our article 5 Reasons People Still Refuse to Own a Microwave.)

But despite its many benefits, can a microwave oven match its other cooking counterparts in all ways? Frozen dinners and revitalized oatmeal are one thing. A prime cut of beef, often considered a paragon of traditional cooking methods, is quite another. On a stovetop? Sure. In an oven? You bet. On an outdoor grill? Mais oui. But can a microwave oven cook a steak to a perfect medium-rare?

A discussion on the online food forum ChefTalk spans six years, with little consensus aside from a shared sense of outrage, disgust and perplexment. Though other precision- and science-based cooking techniques — sous vide and various molecular gastronomy approaches, for instance — have captured the imagination of professional cooks, microwave cooking has not.

"I have never attempted to cook a steak in a microwave," says EJ Hodgkinson, the executive chef of King + Duke, a meat-focused restaurant in Atlanta, Georgia. "I did once witness a chef use a microwave to cook a steak to well-done, after removing it from the grill. I promptly resigned from my position with that restaurant."

If you're going to consider trying to cook a steak to medium-rare in a microwave, it's important to know how a microwave oven works. On the electromagnetic spectrum, microwaves sit between radio waves and infrared radiation. Water, fats and sugar absorb waves in this frequency. Microwaves excite the substances' molecules, producing heat. The adage that microwaves cook "from the inside out" isn't exactly true; microwaves do penetrate deeper than the surface of a food, but they have difficulty going deeper than an inch or so. (Think of how a microwaved beverage can be piping hot on the exterior but still just warm in the center.)

Microwave ovens also cook food unevenly and unpredictably — a factor somewhat mitigated by microwaves with rotating plates, or cutting food to small, even-sized pieces, and the kind of thing you'd want to avoid if looking for an even, consistent medium-rare.

"Proteins like steak benefit from intense exterior heat, both in the caramelization of the protein, and the texture achieved in proper preparation. The benefits of cooking on grills and open flames are vast, though I may be a little biased," Hodgkinson says. (His restaurant cooks its "New American" fare over an open wood-burning hearth.) "Cooking over wood and charcoal specifically gives a depth of flavor that is simultaneously unique, and nostalgic. Proteins and vegetables alike take on wonderful characteristics when treated/manipulated appropriately over open flame."

That said, if a microwave is your only option, you may not be entirely out of luck. "The New Magic of Microwave Cookbook," published in the food-nuking heyday of 1978, suggests using a browning dish or grill pan designed for a microwave, which can mimic some of the exterior browning achieved through traditional cooking. The strategy involves preheating a browning dish in the microwave for seven minutes, then placing an 8-ounce (226 gram) rib-eye steak on the plate, cooking on high for 1 minute, flipping the steak and cooking for another minute, or more if needed. The cookbook also recommends limiting the steak's thickness to no more than three-quarters of an inch (1.9 centimeters) and using a room-temperature piece of meat. A 2016 Foodbeast recipe suggests a similar method but instead proposes using the medium setting on a microwave oven (for juiciness purposes).

And the website Microwave Master Chef tested cooking two similar cuts of meat, one in a microwave and one in a pan. The conclusion? "Microwave steak wins if you want the meat well done right through, without charring the surface. If you like it pink then just use the pan alone."

So while it's not likely that a microwaved steak will be identical to a pan-fried or grilled one, one thing's for certain — if medium-rare isn't your thing, and you like a steak well-done and perhaps with ketchup, microwave away!

Now That's Interesting
The cooking possibilities of microwaves were discovered by accident. In 1945, Percy Spencer, a radar researcher, noticed a candy bar he had in his pocket melted after he stood in front of a magnetron (an electronic vacuum tube that creates high-frequency radio waves). Spencer subsequently tested his observation with popcorn and an egg, and microwave cooking was born.

How Much Money Do You Really Make Selling Stuff Like Rodan + Fields?

Facebook and Cambridge Analytica: What a Tangled Web They Weave 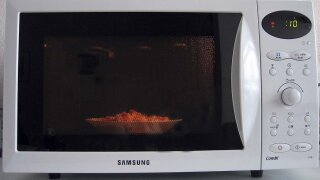 5 Reasons People Still Refuse to Own a Microwave Oven 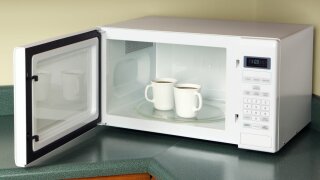 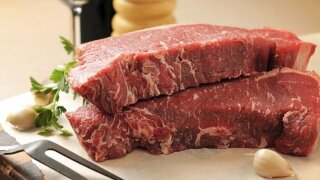