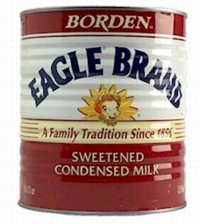 Condensed milk and evaporated milk are not the same. Find out why.
©Eagle Brand

Q. Is evaporated milk the same as condensed milk? Can they be used interchangeably?

A. Evaporated milk and condensed milk are similar canned milk products that have had water removed from them, but one is sweetened and the other is not. Do not substitute one for the other, or you may end up with an inedibly bland or sweet dish.

Evaporated milk is homogenized milk with 60 percent of its water removed and vitamin D added for nutritional purposes. It is unsweetened and is available in whole, low-fat and fat-free versions.

With its slightly caramelized flavor, evaporated milk is commonly used in custards and dishes in which a creamy texture is desired.

Sweetened condensed milk is a mixture of whole milk and about 40 to 45 percent sugar, which is heated until about 60 percent of the water evaporates.

This sticky-sweet ingredient is often used in baked goods and desserts such as candies, puddings, and pies, as well as a substitute for cream and sugar in coffee drinks.