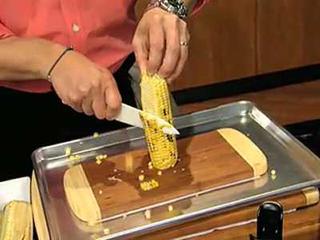 One popular way to cook corn on the cob is to use the grill-top cooking technique, which consists of grilling corn on a barbecue grill. Before you get to the grilling, however, you need to prepare the corn. First, you’ll want to pull down the husks without removing them completely – just expose the corn and the cobs. Then get rid of all the silk, as well as any blemishes. Then place the corn in either a pot or bucket of cold water, in which it will soak for up to 30 minutes. After you have removed the corn from the water, you can spread butter or any other desired seasonings over the kernels. It’s now time to pull the husks back over each ear. A good idea is to secure the top by using twist-ties.

Grilling time has arrived so preheat your grill. It’s recommended that you use medium-hot coals and a covered grill. Place the corn cobs – in their husks – on the grill and allow them to cook for between 20 and 25 minutes. Another way to know when your corn on the cob is ready is by checking to see when it has become tender and hot. It’s a good idea to rotate the ears midway through the cooking time.

The ember cooking method is another common way to grill corn on the cob. This cooking technique puts the corn directly on the embers. When you do cook corn on the cob directly over embers you will need to cover up each ear with foil before grilling. It’s also recommended that you rotate the ears once every 10 minutes when using the ember cooking method.