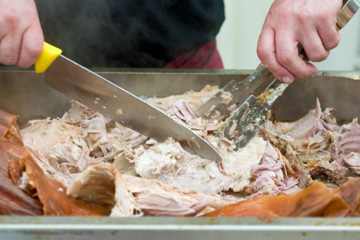 Carving an entire hog can be as time consuming as cooking it. See some pictures of extreme grilling.
©iStockphoto.com/stocknshares

Cooking a whole animal over an open fire originally came about out of necessity. Without kitchens, cooking equipment or utensils, early man pretty much only had fire and little else to cook meat. Over the years, roasted whole animals evolved into a preference rather than a necessity. Roasting a whole hog is a longstanding tradition for many barbecue chefs, especially those in the Southern United States, and most notably in South Carolina. Spending hours waiting for the hog to cook is likened to running a marathon, and it's all part of the fun. Many times a party is arranged around a whole hog roast, called "Pig Pickin'" in the Carolinas. If you're interested in hosting a whole hog cookout, make sure you have a lot of time and patience.

Most butchers don't sell whole hogs or suckling pigs, and you won't be able to run down to your local big-box grocery store chain either. If you live in a rural area, try to locate a local pig farmer. Sometimes a simple knock on the door might yield a sale if the farmer wants to make a few bucks. Your local butcher may be able to order one for you. If not, try asking his or her advice about how or where to get one. If there's an ethnic market or butcher in your area, you may have better luck. Asian, Mexican and other Latin American markets have been known to sell whole hogs. But what you'll probably find is the best bet is the Internet. Thanks to the World Wide Web, you can actually have a whole hog delivered right to your doorstep.

Your standard-sized backyard grill isn't going to cut it for a pig roast. If you don't have a pig roasting pit, you can simply dig a fire pit in your backyard and do it the old-fashioned way. Make sure you give yourself plenty of time to get the heat right. You'll need to add wood to your burning fire for a couple of hours to get the kind of hot bed of coals you'll need. Like most barbecue cooking, slow and low is the only option. So, while you need a hot fire to create the coals, you'll want to maintain a low roasting temperature so the pig's outer skin doesn't burn. The best way to avoid overcooking the skin is by using a rotisserie spit. A standard-size spit may work for smaller sucking pigs, but you'll need a heavy duty version for a large whole hog.

Preparing and cooking the hog is a long, difficult process and should only be attempted if you know what you're doing. Whole hogs are too expensive to leave in the hands of a novice. If you can't clean your own hog, take it to a local butcher. Once it's cleaned, it's ready for the spit. The spit rod should travel along the spine, and heavy duty twine is the only way to ensure that your trussing job will hold the pig on the rotisserie. From there, the fire will do most of the work, but you'll have to rotate the spit. For specifics on recipes and techniques, get a book on whole hog roasting or consult someone who has done it.

Cantonese tradition dictates that new mothers eat a dish prepared by their mother-in-law that consists of pigs' feet and ginger in black vinegar. It's supposed to help increase the new mother's breast milk production.

8 Awesome Uses for Your Instant Pot
Pasta Questions
What's the difference between wet and dry barbecue?