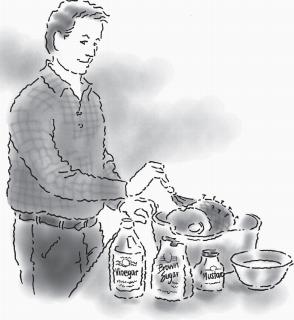 ©2006 Publications International, Ltd. Vinegar can do all sorts of things in the kitchen.

When it comes to cooking, vinegar has more jobs to do than just appearing as an ingredient in recipes. It can perform miraculous tricks for improving flavor, preserving food, filling in for missing ingredients, and even making food look better. This ingredient can prevent spoilage and salvage the occasional cooking disaster. In fact, if you add a drop here and there during the preparation process, vinegar may change the whole personality of certain foods. In this article, we'll show you lots of ways to incorporate vinegar in the kitchen.

: When getting to the bottom of a ketchup bottle, add a little vinegar and swish it around to make the ketchup stretch further. This technique will work for other condiments as well.

Eggs: You can still hard-boil a cracked egg by adding 1 tablespoon of vinegar to the boiling water. The vinegar will prevent the egg white from running out.

: Add a tablespoon or more of vinegar when frying or boiling fish to reduce fishy tastes and smells and to keep the meat soft.

Give canned shrimp and fish a freshly caught taste by covering it in sherry and adding 2 tablespoons vinegar. Soak for 15 minutes, then prepare as desired.

To keep fish white, soak for 20 minutes in a mixture of 1 quart water and 2 tablespoons vinegar.

: When cooking fruit on the stovetop, add a spoonful of vinegar to improve the flavor.

In a tomato sauce or a tomato-based soup, add 1 or 2 tablespoons of vinegar just before completing the cooking process. Flavors will be enhanced.

Meat: Add zip to a pound of hamburger by adding garlic wine vinegar and 1/2 teaspoon mustard. Work these ingredients into meat before making into patties.

Improve the flavor of boiled ham by adding 1 tablespoon vinegar to the cooking water.

The acid content and tangy flavor of vinegar makes it an excellent ingredient in a marinade for meat, poultry, fish, or vegetables. Vinegar can also tenderize tough cuts of meat.

Vinegar comes in really handy when it's time to do some baking.

: Make the crust of homemade bread a nice, golden brown by removing it from the oven shortly before baking time is complete and brushing it with vinegar. Return to oven to finish baking.

You can help homemade bread rise by adding 1 tablespoon of vinegar for every 21/2 cups flour in the recipe. Reduce other liquids in recipe proportionately.

: Make a fluffier meringue that is also more stable by adding vinegar to egg whites before beating. For every 3 egg whites in recipe, add 1/2 teaspoon of vinegar.

: Reduce the overly sweet flavor in fruit pies or other desserts by adding a teaspoon of vinegar.

As you'll see in the next section, vinegar has other uses in the kitchen -- like as a food preservative or a recipe substitute.

In addition to working wonders with cooking and baking, vinegar is useful in other ways. It can be used in food preservation and as a substitute ingredient in receipes. You even can make your own vinegar.

Cheese: Wrap leftover hard cheese in a cloth saturated with vinegar, then store in an airtight container. This will keep the cheese from molding or becoming too hard.

Fruits and vegetables: Freshen wilted vegetables such as spinach or lettuce by soaking them in 2 cups of water and 1 tablespoon of vinegar.

Nothing is more frustrating than when you are cooking and realize there is a missing ingredient. Vinegar came come to the rescue as a substitute.

Buttermilk: As a substitute for buttermilk, stir 1 tablespoon of vinegar into 1 cup of whole milk, and let it stand a few minutes. Then measure out the amount called for in the recipe.

Salt: Instead of salt, use vinegar as a seasoning for foods such as potatoes or other vegetables. Just sprinkle on lightly.

Wine: You can substitute vinegar for wine in any recipe if you mix it with water first. Mix a ratio of 1 part vinegar to 3 parts water, then use whatever amount your recipe calls for in place of the wine.

You can have lots of fun making all different kinds of vinegars by using your favorite ingredients.

Chili vinegar: Put 3 ounces of chopped chilies into 1 quart of vinegar, and store for 2 weeks in a capped bottle. Strain the liquid after 2 weeks. For a spicier, stronger vinegar, let chilies steep longer to taste.

Variation: Leave out the onion for a very light vinegar for fruit salads.

Variation: Use 1 quart red wine vinegar for a resulting vinegar that can be used in place of fresh garlic in most recipes. One teaspoon of the garlic vinegar will be equivalent to a small clove of garlic.

Hot pepper vinegar: Pour 1 pint vinegar into a clean bottle with cap, then add 1/2 ounce cayenne pepper to it. Let mixture sit for 2 weeks out of direct sunlight. Shake bottle about every other day. After 2 weeks, strain and pour into a separate clean bottle for use.

As you can see, you can do so many things with vinegar in the kitchen. So get cooking.