In addition to working wonders with cooking and baking, vinegar is useful in other ways. It can be used in food preservation and as a substitute ingredient in receipes. You even can make your own vinegar.

Cheese: Wrap leftover hard cheese in a cloth saturated with vinegar, then store in an airtight container. This will keep the cheese from molding or becoming too hard.

Fruits and vegetables: Freshen wilted vegetables such as spinach or lettuce by soaking them in 2 cups of water and 1 tablespoon of vinegar.

Nothing is more frustrating than when you are cooking and realize there is a missing ingredient. Vinegar came come to the rescue as a substitute.

Buttermilk: As a substitute for buttermilk, stir 1 tablespoon of vinegar into 1 cup of whole milk, and let it stand a few minutes. Then measure out the amount called for in the recipe.

Salt: Instead of salt, use vinegar as a seasoning for foods such as potatoes or other vegetables. Just sprinkle on lightly.

Wine: You can substitute vinegar for wine in any recipe if you mix it with water first. Mix a ratio of 1 part vinegar to 3 parts water, then use whatever amount your recipe calls for in place of the wine.

You can have lots of fun making all different kinds of vinegars by using your favorite ingredients.

Chili vinegar: Put 3 ounces of chopped chilies into 1 quart of vinegar, and store for 2 weeks in a capped bottle. Strain the liquid after 2 weeks. For a spicier, stronger vinegar, let chilies steep longer to taste.

Variation: Leave out the onion for a very light vinegar for fruit salads.

Variation: Use 1 quart red wine vinegar for a resulting vinegar that can be used in place of fresh garlic in most recipes. One teaspoon of the garlic vinegar will be equivalent to a small clove of garlic.

Hot pepper vinegar: Pour 1 pint vinegar into a clean bottle with cap, then add 1/2 ounce cayenne pepper to it. Let mixture sit for 2 weeks out of direct sunlight. Shake bottle about every other day. After 2 weeks, strain and pour into a separate clean bottle for use.

As you can see, you can do so many things with vinegar in the kitchen. So get cooking. 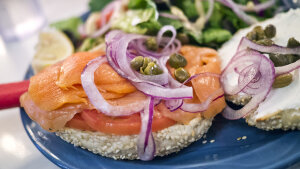