Is all of today's wheat technically artificial? 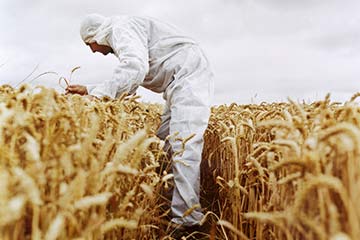 Today's wheat is a product of centuries of cross-breeding, but does that mean it has been genetically engineered?
Karl Gupe/The Image Bank/Getty Images

There's been a lot of finger-pointing at wheat in recent years. Cases of celiac disease have skyrocketed and gluten-free diets are all the rage, with wheat being blamed for all sorts of ailments, from digestive problems and joint aches to diabetes and cancer. Today's wheat plant, it's said, has changed so much from its original version that people are no longer able to process it properly. Because of human intervention and the never-ending race to plant more crops and make more money, we've ruined the wheat plant and our bodies are suffering.

It is true that modern bread wheat is entirely a product of human intervention. It's known as semi-dwarf wheat: The plant is much shorter, and the grain is much smaller than its ancestors. Interference with the wheat plant is pretty old news, though — it's been happening ever since our ancient ancestors started cultivating it about 10,000 years ago. Over the centuries the cultivation has become more advanced and widespread, but it's been a continuous process. The effects of these changes are a subject for a different article, but you certainly could say that today's wheat is "artificial." It couldn't have developed naturally.

The domestication of wheat was a major step in human society moving from a hunter-gatherer model to an agrarian one. The first cultivated wheats were a tetraploid variety — with four sets of chromosomes — called emmer and einkorn, a diploid wheat, with two sets of seven chromosomes. Right off the bat, farmers noticed beneficial characteristics in certain plants — durability, size, high yield — and began choosing and rejecting them based on those observations. They also crossbred a wild grass into the wheat. Change was fairly rapid even with this extremely low-tech method of plant breeding: Within about a thousand years, hexaploid bread wheat (six sets of chromosomes) had appeared. Another crucial development from this method was the gradual evolution of a nonscattering seed, which made harvesting much more efficient.

The hybridization and genetic alteration of wheat continued for centuries, becoming more advanced as technology developed. Gene alteration became highly specific, with scientists creating disease-resistant varieties and fine-tuning nutritional content. In the mid-20th century, biologists started using mutagenic breeding to induce beneficial mutations with radiation. Mutagenic breeding also can involve exposing wheat seeds and embryos to chemicals. These techniques were a crucial part of the Green Revolution, a series of agricultural developments that improved crop yields all over the world.

Some may say this is putting too fine a point on it, but wheat is not genetically engineered. That's a more targeted process in which certain genes are isolated and inserted. Genetic engineering is highly regulated, but using other techniques to alter genes is not — and there's a large push by some factions to increase that regulation. Modern wheat is genetically complex, and researchers are only now beginning to unravel its genome. That might lead to discoveries about its effects on our bodies — and then, most likely, to more genetic tinkering.