Why Is Lobster So Expensive, and Will it Stay That Way?

In the spring of 2018, U.S. lobsters sold for $10 to $12 a pound — a price range that has made lobster a luxury in our minds and culture. It's on the menu at fine dining restaurants and pricey steakhouses, and in the best New England summer shacks and sandwich shops, a lobster roll can sell for as much as $70.

But lobster hasn't always been a luxury or expensive — and current political and trade policies are not only changing its prices, they're hurting the U.S. lobster business. Long-term, it may impact how we even think about the lobster itself.

Colonial History of the 'Laabsta'

Back in the 17th century, when America was still a bunch of colonies, colonists wrote about lobsters in the New England area weighing 16 to 25 pounds (7 to just over 11 kilograms). Some of the largest weighed 45 pounds and grew to 4 to 6 feet (1.2 to 1.8 meters) long. And there were so many lobsters, there are claims that the shellfish would wash up 2 feet (.6 meters) deep on Massachusetts's shores.

Lobster was so abundant, it wasn't worth much. Colonists considered lobster cheap eats — it's what you'd eat when there was nothing else around and you didn't want to starve. Primarily, lobster was for indentured servants, slaves, prisoners — and even pigs. Everyone else was embarrassed about eating it. (Oysters fell into the same category.)

Colonists, did, however, see lobster as a resource: It was plentiful, cheap and they could make money from it by shipping it back to Europe, and the Dutch had come up with a way to transport lobster across the Atlantic and keep it fresh. Organized lobster fisheries opened in Maine in the mid-1800s, and lobster canning businesses started and flourished. Near the turn of the century, Maine lobstermen were landing more than 11,000 tons (10,000 metric tons) of the critters.

And lobster wasn't just crossing the ocean, but also the nation, thanks to the railroad industry, onboard dining and inland restaurants, where lobster was served to new audiences as a side dish or a salad ingredient. The experience of dining on a railcar or enjoying seafood far from a coast helped turn lobster into a luxury dish. Overfishing at the beginning of the 20th century drove prices up, as did conservation laws in the mid-20th century.

That's a good thing, too, because in recent years, lobster industry reps from Maine have built international demand for their products, and China has been poised to purchase significant amounts of lobster. In the first two quarters of 2017, China imported $39.5 million worth of live lobster, the best year to date. And between January and June 2018, the U.S. sold $87 million in live lobster to China.

U.S. lobster exports to China have surged since 2012.
ATLAS

But the dollar signs that people in Maine's lobster industry were seeing vanished after the Trump Administration imposed tariffs that caused China to retaliate with tariffs of its own, including a 25 percent tariff on U.S. lobster.

The impact of the tariffs is dramatic: In June 2018, live lobster exports to China topped $11.8 million. In July, the first month under the new tariffs, exports to China dropped to $4.2 million — lower than the amount shipped in July the year before. The Chinese and Canadians have even created a workaround: As Canada's supply goes through its seasonal drop, they are buying U.S. lobster and selling it to China.

"The U.S. lobster industry is at an extreme disadvantage with international trade right now, as we face tariffs in Europe and China, while the Canadians don't," John Sackton, editor and publisher of Seafood News, said in an email interview. "This means the U.S. must look for niche markets, like Singapore or Korea."

With U.S. supply higher than it's ever been — and China's demand suddenly dropping to below 2017's levels — you might think lobster may become painfully abundant and cheap. But the U.S. economy is strong, and lobster industry experts say there's not only opportunity, but workarounds.

"What is happening to lobster prices is unclear, because there are many contradictory factors," Sackton says. "Maine has lost the ability to ship lobsters to China, but on the other hand, demand for lobster tails is very strong, and these are processed in Canada, so there is continued strong demand from processors for Maine lobster. We will have to see what happens to live lobster prices over the holidays."

Now That's Scary
In July 2018, the first month the 25 percent import tariff on U.S. lobster went into effect, live lobster exports to China tanked 64 percent compared to May and June 2018.

FEMA Will Be Sending Americans with Cell Phones 'Presidential Alert' on Oct. 3 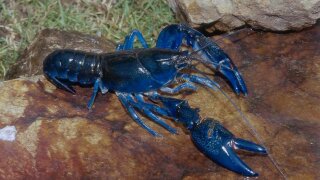 Are Blue Lobsters As Rare As Blue Moons? 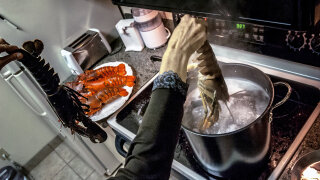 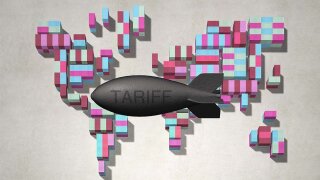 Who Wins and Loses in a Trade War?