by Kathryn Whitbourne Nov 10, 2017
There's nothing like a creamy spread of peanut butter on bread. Richard Eskite Photography/Getty Images

The peanut butter and jelly sandwich is one of America's most classic inventions, something enjoyed by both children and adults. But how did this love affair with peanut butter start? Here are five things you didn't know about peanut butter.

1. This Is One Peanut Product We Can't Credit Carver For.

Although George Washington Carver invented some 300 uses for the peanut (including face powder and chili sauce), peanut butter wasn't one of them. He did create a peanut paste, but historians believe that the South American Indians were the first to do this. In 1890, a St. Louis physician also created a type of peanut paste for people with bad teeth who could not chew. In 1895, Dr. John Harvey Kellogg (of the cereal company) patented the process of making peanut butter with steamed nuts. In 1904, C.H. Sumner introduced peanut butter to Americans at the St. Louis World's Fair (the same fair that introduced the ice cream cone).

2. The PB&J Sandwich Used to Be High Class.

The first reference to peanut butter joining with jelly in sandwich matrimony was in a 1901 recipe by Julia Chandler Davis in the Boston Cooking School magazine. During the early 1900s, peanut butter was an expensive delicacy, served in upscale tearooms. (One place even had a peanut butter and pimento sandwich.) As the price of peanut butter fell due to commercialization, the food moved down the economic class ladder and became an everyday treat for everyone. When sliced bread was invented in 1928, the peanut butter and jelly sandwich became a kids' favorite because they could make it themselves.

So why are peanut butter and jelly so good together? In the book "Peanuts: The Illustrious History of the Goober Pea," Andrew F. Smith points out that peanut butter is a "relatively neutral platform providing a nutty taste and a sticky texture that [binds] together various ingredients." And jelly can be relatively tart, providing a nice counterpoint. All you need is some soft bread to complete the taste perfection.

3. Two Presidents Are Linked With Peanuts.

You probably know that Jimmy Carter was a peanut farmer before he became a U.S. president. But he wasn't the first. Way back in the 1700s, Thomas Jefferson grew 330 varieties of more than 70 different species of vegetables, including the peanut, at his home in Monticello. (Peanuts are considered legumes, botanically speaking). Two hundred years later, Carter expanded his father's peanut business to include selling farm supplies as well as peanut seed he'd grown himself. During his presidency, he transferred the business to a trustee. After he lost his re-election bid in 1981, he learned that the business was $1 million in debt and he decided to sell it. Carter still lives in Plains, Georgia, the state that grows half the peanuts in America.

4. Americans Would Rather Be Smooth Than Crunchy.

It's an age-old debate: Is crunchy or smooth peanut butter better? The Southern Peanut Growers Association says 63 percent of Americans prefer smooth, while 37 percent love crunchy. And the National Peanut Board notes that men like crunchy while women and children prefer smooth. Weirdly (or perhaps not), the West Coast goes for the crunchy and the East Coast goes for the creamy.

Smooth peanut butter was invented first, in 1922 by Joseph Rosefield who developed a patent to create peanut butter that did not separate. He licensed the technology to the company that became Peter Pan. But after it wanted to cut the licensing fee, Rosefield started his own company, Skippy. He also invented crunchy peanut butter in 1932 by incorporating tiny pieces of peanuts into a smooth butter.

Two tablespoons of Jif Creamy (America's best-selling peanut butter) has 190 calories, 14 percent of your daily saturated fat requirement and 3 grams of sugar. However, it also has 7 grams of protein, 2 grams of fiber and healthy levels of vitamin E, niacin and potassium. Natural peanut butter has about the same number of calories but somewhat less saturated fat (10 percent of the recommended dietary allowance) and sugar. So while peanut butter has some nutritional value, it's best not to overdo your love for it.

Now That's Interesting
Among the uses for empty peanut shells: kitty litter, mulch and packing fragile items. (Well you use Styrofoam peanuts for the latter — why not real ones?)

Why Do People Find Leaf Blowers So Irritating?

Our World Is Rich With Places to See Real Dinosaur Tracks 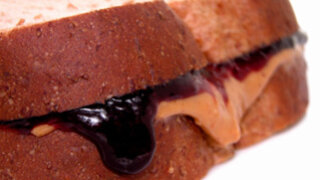 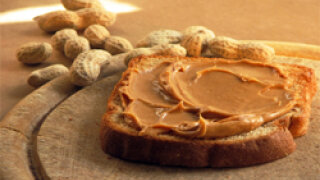 Is there a cure for peanut allergies? 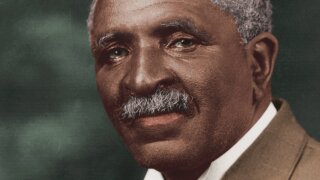 What were George Washington Carver's inventions?