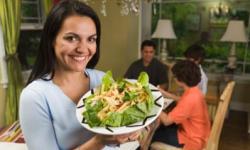 Cut the salt but keep the flavor in your meals. See more pictures of sensational salads.
Comstock/Jupiterimages/Thinkstock

Cutting back on sodium? Even if you've stopped sprinkling salt on your foods, you could still be on sodium overload. According to the Center for Science in the Public Interest, 77 percent of your daily sodium comes from the processed and prepared foods you eat -- long before you ever add a dash of salt.

While you may expect to find sodium in the obvious places -- salt-covered pretzels, for example -- it also lurks in thousands of other ready-to-eat foods, from pudding and cereal to bread and canned vegetables. And, because sodium occurs naturally in a variety of foods, you're not in danger of getting too little.

Why does that matter? For starters, you can't live without sodium. It helps maintain fluid levels within blood cells that transmit information to muscles and nerves. It also helps your small intestine absorb nutrients. However, too much sodium in your diet can lead to high blood pressure, which can play a part in heart disease, kidney disease or strokes.

So, even though you need sodium, you're on the right track if you've put down the saltshaker. Just one teaspoon of salt contains a whopping 2,325 milligrams of sodium, which is more than your 2,300-milligram daily limit -- and most Americans consume two or three teaspoons of salt every day.

If you're really determined to watch your sodium intake, try fixing these foods for dinner. Not only are they nearly sodium-free, they're tasty, too.