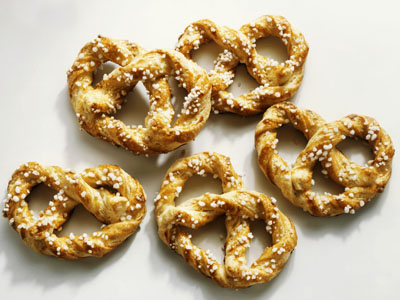 National Pretzel Day is April 26. Eat a bunch of pretzels with someone you love! See more pictures of foods under $5.
Eising/Getty Images

In the 1,400 years since the pretzel was invented, bakers have come up with a wide variety of shapes and flavors. The history of this adaptable snack shows its versatility.

The world can thank a frustrated teacher with leftover bread dough for the invention of the soft pretzel. In A.D. 610, while baking bread, an Italian monk decided to create a treat to motivate his distracted catechism students. He rolled out ropes of dough, twisted them to resemble hands crossed on the chest in prayer, and baked them. The monk christened his snacks pretiola, Latin for "little reward." Parents who tasted their children's classroom treats referred to them as brachiola, or "little arms." When pretiola arrived in Germany, they were called bretzels.

Perhaps because of its religious roots, the pretzel has long been considered a good-luck symbol. German children wear pretzels around their necks on New Year's Day. In Austria in the 16th century, pretzels adorned Christmas trees, and they were hidden along with hard-boiled eggs on Easter morning.

The phrase "tying the knot" came from the Swiss, who still incorporate the lucky pretzel in wedding ceremonies. Newlyweds traditionally make a wish and break a pretzel, in the same way people in other cultures break a wishbone or a glass.

In Austria, signs outside many bakeries depict a lion holding a pretzel-shaped shield. According to a legend that dates to 1510, pretzel bakers working before dawn heard Ottoman Turks tunneling under Vienna's city walls and then sounded an alarm. The city was saved, and the bakers were awarded their unique coat of arms by the Viennese king.

Hard pretzels were "invented" in the late 1600s, when a snoozing apprentice in a Pennsylvania bakery accidentally overbaked his pretzels, creating crunchy, seemingly inedible, knots. His job was spared when the master baker, attempting admonishment, took an angry bite out of one--and loved it.

Julius Sturgis opened the first commercial pretzel bakery in Lititz, Pennsylvania, in 1861. He received his original pretzel recipe as a thank you from a down-on-his-luck job seeker after Sturgis gave the man dinner.

Until the 1930s, pretzels were handmade, and the average worker could twist 40 a minute. In 1935, the Reading Pretzel Machinery Company introduced the first automated pretzel machine, which enabled large bakeries to make 245 pretzels per minute, or five tons in a day.

More than $550 million worth of pretzels are sold in the United States annually; 80 percent are made in Pennsylvania, where hard pretzels originated.

President George W. Bush was munching on a pretzel in the White House when he choked and lost consciousness while watching the 2002 Baltimore-Miami NFL playoff.

Pretzel bakers may have been the first to advertise "We deliver!" Medieval street vendors carried pretzels on a stick and sold them to the locals. Today, soft pretzels remain a popular pushcart item in Philadelphia and New York City.

Joe Nacchio, of Federal Baking in Philadelphia, holds the record for baking the largest pretzel: It's 5 feet across and weighs 40 pounds.