Why Are Certain Foods Eaten Mainly at Breakfast?

by Shaun Chavis Sep 3, 2019
A typical American breakfast today is often something that can be prepared and eaten fast, like cold cereal, fruit and muffins. kate_sept2004/Getty Images

Bacon, eggs, toast: If you grew up in North America or Europe, you're probably picturing breakfast. But when you think about it, anything nutritious and filling is enough to get you going in the morning. So why don't Westerners associate things like fish and rice or a bowl of beans with breakfast? And why do they have a category of food just for that first meal of the day?

The history of what Americans consider as breakfast food traces its roots back hundreds of years. "There are a host of influences that have shaped the concept of breakfast, from older Christian beliefs, socio-economics, trade, technology, medical theory and constructs of nutrition, convenience and marketing, to name a few," says Dr. Beth Forrest, a professor of liberal arts and applied food studies at the Culinary Institute of America in Hyde Park, New York.

Breakfast foods like eggs, sausages and a version of pancakes were typical in Ancient Rome, though few people at the time ate early in the morning. And creating a category of food we think of as breakfast fare is a complicated story.

First, just the word has historically meant different things. "Depending on the language, 'breakfast' (or break fast) was seen as the first meal of the day, important tied to concepts of fasting before taking the Eucharist, but it doesn't appear in written form until 15th century in English," Forrest says via email. "But, this same meal can translate to 'small lunch' in French, or even 'light supper' in Italian."

In some ways, what we associate with breakfast is what people woke up to hundreds of years ago. And of course, it's also changed significantly. "Fish, beer and wine could be found on the table going back to the medieval period, in addition to foods that we see today — eggs, bacon, bread and cheese," Forrest says. "Conversely, porridges (oatmeal and other grains) would be consumed across meals, and not regulated to only the breakfast meal."

But, she explains, things changed during the Industrial Revolution, as people began to have less time to devote to meals. "Breakfast is often necessarily fast and the foods that are served for breakfast need to be able to be prepared quickly."

Time is just one of the factors that's shaped what Americans know as breakfast. The rest of the story of can be told through the foods.

Bacon (and Eggs) Was a PR Stunt

We'll be the first to admit that bacon is awesome, but it wasn't always a staple of breakfast. So how did it become an essential of the morning meal? Public relations. The story goes like this: In the 1920s Beech-Nut Packing Company wanted to get more people to eat bacon. Beech-Nut was a producer of lots of foods at the time, including chewing gum, peanut butter and, you guessed it, ham. The company hired PR consultant Edward Bernays who just happened to be the nephew of Sigmund Freud. They found that most Americans ate light breakfasts, so Beech-Nut's new campaign suggested a heavy breakfast would be healthier "because the body loses energy during the night and needs it during the day." That message was spread in newspapers around the country, and wouldn't you know, sales of bacon began to skyrocket, and soon eggs and bacon were married forever.

In some parts of the country, nothing screams breakfast like a bagel with a schmear. And the bagel is a great example of how immigration changed our morning meals. More than 2.5 million Jewish people came to the United States between 1880 and 1920, fleeing violence, riots and persecution in search of a place to build new lives. Many of them were Poles who opened small bakeries and made their goods by hand, including bagels. By 1910, New York City had established itself as the home of the American bagel industry, and even formed a bagel union in 1915 (Bagel Bakers Local #338).

But it wasn't until the '50s and '60s that bagels became available prepacked and for sale in grocery stores, thanks to Murray Lender (Lender's Bagels). And we can thank Family Circle magazine for spreading the gospel of cream cheese, lox and bagels (and suburban housewives for the ingenious idea).

Cold Cereal Was a Fluke

Cold cereal has a rather strange history. It got its start as a health food served to patients in sanitoriums (facilities where patients needed a long stay for treatment). Dr. John Kellogg (yes, that Kellogg), ran a sanitorium in Battle Creek, Michigan, and made a type of granola (nothing like the granola know today) out of wheat, cornmeal and oats.

Grains were considered a good remedy for chronic digestion problems that patients developed after following the high-protein diets that were popular at the end of the 19th century. Kellogg's granola was so popular, he was selling 2 tons (1.8 metric tons) a week by 1889.

Because oat groats had to be soaked and then cooked, Kellogg needed to develop something fast and easy to serve. His brother, W.K., helped him experiment with granola, and they developed a process to develop crispy wheat flakes — the first flaky breakfast cereal. Four years later they were selling toasted corn flakes, and cold cereal was born. W.K. wanted to add sugar to the cereal — something his brother disagreed with. So, W.K. left and started the company that would eventually become the Kellogg Company.

The success of cereals becoming such a huge part of breakfast in the U.S. is much more than a story of a health food, though. It's also an example of the power of marketing. "Dr. Kellogg ... promoted his corn flakes as healthy and spread his gospel through cookbooks, public lectures, teaching kitchens, and marketing pamphlets," Forrest says. "In terms of the media, breakfast and breakfast foods have long appeared in art and literature, and this can include advertisements that appear in magazines and on television. Children, in particular, have been targeted by marketing, through cross-promotional advertising and, as early as 1909, offered prizes tied to cereal boxes."

By the time the 21st century dawned, cold cereal accounted for 35 percent of breakfasts in America. By 2018, the business was worth billions; Americans ate $8.5 billion worth of cold cereal alone, according to Kiplinger's.

Cereal is one of the first breakfast foods little kids can make on their own.
PeopleImages/Getty Images

People have been growing oats (and eating them) since 2500 B.C.E., and those oats (and other porridges) have been part of breakfast for centuries. In early America, settlers brought oats with them and planted them primarily for animal feed, though they eventually ate them, too. But the oats we know today aren't quite what the settlers were eating then. Instead of rolled oats, they were cooking and eating oat groats (the whole oat grain, unrolled).

In the late 19th century, two men, Henry Seymour and William Heston, developed rolled oats, and started a company to sell them: Quaker Oats. Their packaging featured the image of a Quaker man. However, neither Seymour or Heston were Quakers (a term for members of the Religious Society of Friends).

During the 19th century, food fraud — practices such as watering down milk, or adding chalk and plaster to flour — was common. Quakers had a reputation for being honest, and so Seymour and Heston used the image of a Quaker man on their oatmeal, along with the word "pure," to associate their product with integrity and quality.

Credit political resistance for America's coffee obsession. Coffee is originally from Ethiopia, and no one is sure exactly when someone first brewed and drank the stuff. (Legend has it that an Ethiopian herder noticed his goats were extra perky after eating some berries, and he decided to give it a try.)

In the Colonial era, American colonists preferred tea. But after England began to heavily tax tea and Americans responded with the Boston Tea Party, drinking coffee became patriotic. Some also believed coffee was medicinal. Later, during the Civil War, soldiers on both sides wanted coffee to keep them going. But Confederate soldiers often couldn't get it, and made substitutes out of dandelion roots or toasted okra seeds.

Today, coffee is one of the most popular drinks in the United States. The 2019 annual report from National Coffee Association found that 63 percent of Americans drink the stuff every single day.

Coffee is one of the most popular drinks in the United States.
Morsa Images/Getty Images

In Colonial America and until the mid-19th century, the breakfast drink of champions was hard cider or low-alcohol beer. Presidents drank cider, and children drank cider. Hardly anyone drank orange juice or ate oranges because they were expensive and hard to get. But several things happened to make O.J. a popular breakfast drink in the early 20th century U.S. First, railroads helped growers expand. Second, in the late 1920s, a scientist isolated Vitamin C, and identified oranges as a great source of the vitamin.

But in 1942, the U.S. Army offered tons of money to the company that could figure out how to produce frozen orange juice that actually tasted good. Enter Richard Morse: He became the first to commercially produce frozen orange juice concentrate under the brand name Minute Maid, making O.J. a morning must-have. Even though O.J. remains popular, it's not what it used to be. Since 2000, Americans have been drinking about 3 gallons (11 liters) less a year per capita, mainly because they are concerned about its nutritional content.

Now That's Interesting
Ever wondered why bagels have holes? There are several theories,like the holes save on ingredients (no!) to bagels were for women who'd just delivered babies because bagels represent the circle of life (um, OK?). The most likely reason relates to their 20th-century introduction to breakfast fare in the U.S.: The holes were so bakers could thread the bagels on long sticks so they could sell them on the streets of New York City.

The Mighty Banyan Tree Can 'Walk' and Live for Centuries 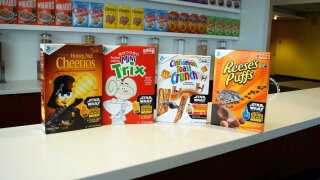 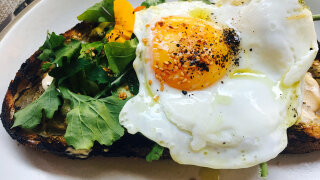 Why a Second Breakfast Can Be Good for Us 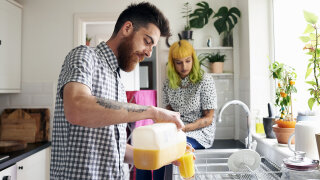 Is Juice Really Better for You Than Soda?