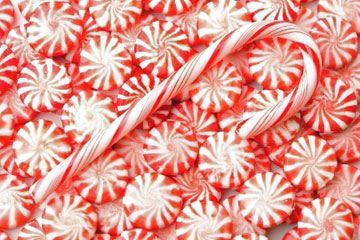 If you've decorated your tree with those sweet hooked candies that look like modified barber poles, you've indulged your decorating sense, and probably your sweet tooth, with a traditional holiday favorite, the peppermint candy cane.

The history of the candy cane starts with simple hard candy used for medicinal purposes. Peppermint and sugar were both thought to have curative properties, and because they were medicinal, sugar sticks and lozenges made using a pulled sugar technique were popular during the 17th century, especially during Lent when other types of indulgences were forbidden. As if the sweet taste wasn't enough, sugar candies were also originally considered particularly special treats because sugar was a rare and costly commodity.

When we look at candy canes, they have two very distinctive characteristics that distinguish them from ordinary hard candy, the crook and barber pole color pattern. The crook, which makes candy canes easy to display on Christmas trees and garlands, is a unique shape that was first adopted in Cologne, Germany, in 1670. The story goes that a choirmaster at Cologne Cathedral first employed the distinctive curve to represent a shepherd's crook for candy that he handed out to children during long Christmastime church observances. This was considered a devout way to offer a sweet bribe to keep the children quiet.

We don't know who to thank for the distinctive alternating color pattern on candy canes, but we can guess that the practice of coloring them with diagonal red stripes was adopted in the late 19th century. By the Early 20th century, cards and decorations had already started sporting festive looking candy canes with the familiar striped pattern [source: National Confectioners Association].

Candy canes may now be available in blueberry, chocolate and all manner of flavors, but for over a century, peppermint ruled. The use of this distinctive herb as a flavoring for candy dates back to the Renaissance, and there are benefits of adding peppermint to candy. Peppermint is effective at settling an upset stomach, and it tastes strong and refreshing. If that rich holiday dinner leaves you feeling a little queasy, just snag a candy cane off the tree and you have dessert and a convenient stomach remedy all in one. It also makes a handy breath freshener. If you don't have a candy cane around, a peppermint lozenge will work just as well.

Bringing Candy Canes to the Masses

Candy cane production was a pretty limited affair until the 1950s, when automated processes were developed to pull, bend and twist the candy into shape. This innovation helped to make the mass production of candy canes possible. After that, packaging innovations and careful marketing helped to elevate the candy cane to great heights, both on the tree and in the hearts of children everywhere.

If you're thinking about making your own candy canes, the process is hard work. The hot candy has to be colored and hand pulled until it is silky smooth. Then it's blended, rolled and formed. If you have some time on your hands and need an upper body workout, give it a try.

Although peppermint is one of the most popular, there are hundreds of varieties of mint, including apple mint, chocolate mint and pineapple mint [source: Special Produce].