How Chopsticks Became the Staple Utensil of Asia

by Stephanie Vermillion Feb 5, 2020
Chopsticks come in many different shapes and styles, and have been a staple utensil since around 1200 B.C.E. ©eleonora galli/Getty Images

While they may seem like a cruel tool that distinguish sushi regulars from novices, chopsticks entered the world well before California rolls and bento boxes. The utensils earned their place at the Chinese dinner table around 400 C.E., but were institutionalized in China well before that — think around 1200 B.C.E.

Fast forward 3,000 years and an exorbitant amount of rice later, and these thin handheld sticks have only grown in popularity. More than 20 percent of the world's population relies on chopsticks for eating. China alone goes through 45 billion disposable pairs per year. So how did two sticks start a massive mealtime revolution?

Chopsticks Started Out As Cooking Tools

China was the first to experiment with chopsticks nearly 3,000 years ago. But at that time, they weren't used as eating utensils. The Chinese used them for cooking since they could safely dip them into boiling pots of water.

Then China's population boomed. Cooks were forced to conserve resources, which meant chopping food into tiny bites that used less fuel to cook. Bite-sized foods, paired with Chinese philosopher and vegetarian Confucius' anti-knife beliefs, set up the utensil for widespread adoption beyond China. (Confucius saw knives as a reminder of the slaughterhouse.)

Not All Chopsticks Are the Same

Chopsticks are different throughout Asian cultures. Chinese chopsticks, for instance, are long and thick "to facilitate dining around the table," Ruixi Hu, founder of Lost Plate Food Tours, says in an email. Hu grew up in Chengdu, China, where she first used chopsticks at age 2. She now leads food tours throughout Asia and she's encountered many chopsticks varieties in the process.

In Japan, where bamboo chopsticks were adopted in 500 C.E. for religious ceremonies, chopsticks have evolved drastically over time. They're now particularly finetuned for one of Japan's main foods: fish.

"Japanese chopsticks are short and sharp, mainly because [the Japanese] are good at eating fish, and it is easy to remove fish bones with sharp chopsticks," Hu says. The Japanese usually eat individual portions versus shared dishes, she explains. That's why their chopsticks don't need to be as long.

Japanese chopsticks tend to be shorter and sharper than others to make it easier for the user to pick up sushi and fish.
South_agency/Getty Images

While ubiquitous now, disposable wooden chopsticks were first invented by the Japanese in 1878. The upper class in China and Japan used ivory, jade, coral and silver chopsticks. They believed the latter would "corrode and turn black if it came into contact with poisoned food." Now, China uses bamboo for chopsticks since it's so easy and inexpensive to obtain.

Head over to South Korea and chopsticks look a bit different. There, chopsticks are flat and typically made of metal. That's because South Koreans love barbecue, Hu says. The metal chopsticks won't burn when diners are grilling their meat tableside. And, despite their prevalence in American restaurants, Thais don't really use chopsticks. (Historically the Thai ate with bare hands and, when necessary, with forks or spoons.)

How You Hold Your Chopsticks Matters

Hu says chopsticks holding styles are more about personal preference than geography, but certain regions hold beliefs about what chopstick-holding preferences mean. "In my hometown, people say if you hold chopsticks toward the bottom (closer to your food) you will marry someone nearby," she says. "If you hold them at the top, far away from the food, you will marry someone far away."

Another belief is "the further apart you hold your chopsticks, the further from home you will go," according to the website China Highlights. That's why those in rural China often hold their chopsticks parallel or in an "X" shape, while foreigners or those in more urban parts of China hold chopsticks apart in a V-formation.

While holding styles may be subjective, chopsticks etiquette is not. Everything Chopsticks says there are rules to follow:

And speaking of resting chopsticks, Hu has some advice for westerners. "You should never stick your chopsticks into your food and let them rest there; you should always place them on top of the bowl or plate, parallel to the table," she says. "This is because sticking them in your food is similar to putting incense in a pot or bowl, which is what we do for ancestors who have passed away. So if you do this, we think it means you've called some homeless street ghosts."

Why — And How — to Use Chopsticks

For the untrained, chopsticks may seem rule-heavy, high risk and — given spills and slip-ups — hardly worth the reward. But these small bamboo utensils do have surprising benefits. According to Dr. David Samadi, chopsticks can actually help diners maintain a healthy weight because they force you to eat slowly, thus helping control your portion size and reduce your risk of heartburn.

So what's the best way to hold them? "Take one chopstick and hold it like a pencil," Hu says. "This will create a hole because your thumb and index finger will touch, and then you just slide the other chopstick through the hole. You should really only need to move the chopstick that you are holding like a pencil, the other one stays still." Easier said than done.

NOW THAT'S INTERESTING
If chopsticks terrify you, it could be more than fear of embarrassment. Consecotaleophobia is a real-life fear of chopsticks that causes anxiety even at the sight — and sometimes thought — of these wooden utensils. 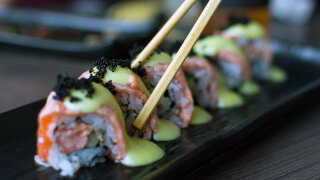 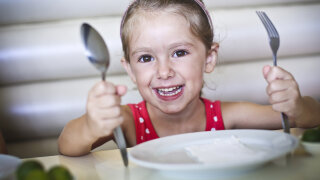 Why does it matter which fork you use? 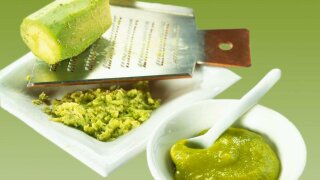 That Green Stuff at the Sushi Restaurant? Not Really Wasabi