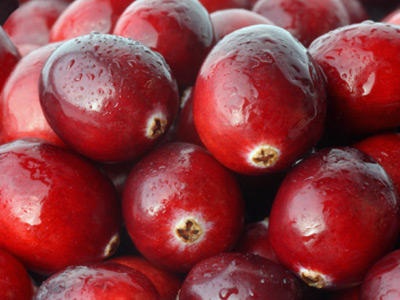 Rich in vitamin C, cranberries may be able to cure what ails you. Apples are also a good source of vitamins. Check out these fruit pictures.
Rosemary Calvert/Photographer's Choice/Getty Images

Native Americans knew the value of the cranberry long before the arrival of the Pilgrims. They used it in a variety of foods, as medicine and as a dye for coloring fabrics. Cranberries were first cultivated in 1816, when Captain Henry Hall discovered the secret was in the sand. Other growers used Hall's ideas and less than 60 years later, there was a cranberry growers association in the United States. These days, the United States harvests cranberries from more than 40,000 acres (16,187 hectares) of bog. Cranberry vines, as long as they're well cared for, can live indefinitely. In Massachusetts, the heartland of cranberry cultivation, there are vines that date back as far as 150 years. They remain a staple Native American fruit today, popular because of their delicious taste and healthy properties.

Most people are under the mistaken impression that cranberries are grown in water. Cranberry vines are actually grown in impermeable beds filled with sand, gravel, clay and peat. A lot of water is required, though, so a cranberry bog must be near a plentiful source of fresh water to go along with the required acidic soil. They're grown from April to November and go dormant the rest of the year during the cold winters in many of the areas where cranberries thrive. This winter hiatus is important because it helps to mature the fruiting buds. These unique growing environments were initially formed naturally thousands of years ago by glacial deposits.

Cranberries are low in sodium, contain almost zero fat and do not contain any cholesterol. Because they're rich in vitamin C, cranberries were brought on board ships hundreds of years ago by sailors to prevent scurvy. Doctors and nutritionists later discovered that cranberries have compounds that help to block bacteria believed to be responsible for urinary tract infections, gum disease and ulcers. Only 10 ounces of cranberry juice cocktail are required per day to meet levels necessary to help block the bacteria. Cranberries are often packaged with other healthy foods, like granola mixes. This only increases the benefits of eating foods containing cranberries. The health benefits of cranberries are present in all its forms, from juices and coulis to dried berries.

Cranberries are a versatile fruit and can be used in many different recipes. Many people associate cranberries with the winter holidays, so cranberry sauce is likely to make an appearance on most American Thanksgiving tables. These sauces range from a homemade blend with a gourmet touch to cranberry gelatin right out of the can. Another great holiday recipe you can bring to your next Christmas party is a simple-to-make cranberry dip. Blend three cups of fresh minced cranberries with a quarter cup of green onions, two small, seeded jalapeno peppers, 1/2 cup sugar, 1/4 cup cilantro, 2 tablespoons fresh grated ginger and 2 tablespoons lemon juice. Mix well, pour over a block of cream cheese and serve with crackers for a delicious Christmas party dip.

Honeybees are needed to pollinate cranberry crops, and they're actually more valuable to cranberry growers than they are to making honey.

Does whole milk spoil faster than skim milk?
What's the Difference Between Snow Crab and King Crab?
10 Cupcakes That Won't Put on the Pounds