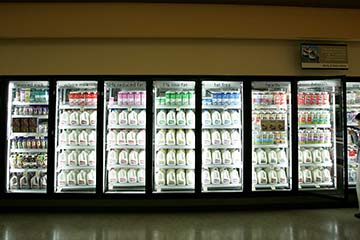 The jury is still out on whether whole milk spoils faster than skim.
Justin Sullivan/Getty Images

We've all had moments of uncertainty (and, let's face it, paranoia) about the state of the food sitting in our refrigerators. You might be able to eyeball some of the suspicious items, check for expiration dates on others, and with some — milk, usually — you'll probably take a quick whiff and hope for the best. But if you've ever looked at a shelf-life chart to figure out how long your milk might last, you might have noticed that on skim milk is said to last a day or two longer than whole milk. Why is that?

Before we get started, we should state that there is by no means universal agreement on this issue. Some dairy scientists say skim lasts longer because certain fat-loving microbes can't develop as quickly in nonfat milk. Others say that whole milk lasts longer because free fatty acids might actually be natural preservatives. Still others say that maybe there isn't a difference in spoilage rate at all — it's just that we notice flavor changes more in skim milk [sources: Murphy, Roberts].

There's been only one major controlled study on the spoilage rates of whole and skim milk, and it was somewhat inconclusive. Skim milk was found to spoil slightly faster, but the researchers weren't exactly sure why. Psychrotrophic, or cold-resistant, bacteria are what cause spoilage in the fridge, and they multiplied at the same rate in both types of milk. When the milk spoiled, both whole and skim contained similar strains of bacteria. There was a pronounced difference in how whole and skim milk reacted when they were injected with the same spoilage microorganisms, but they affected the milk's taste and smell more than they did the spoilage rate. (Whole milk, for the record, tended to turn sour, and skim milk was on the bitter side [source: Deeth and Khusniati].)

So for the purposes of your average milk consumer, there's really no hard-and-fast rule about which kind will spoil faster. If whole milk does last longer than skim, the difference is so slight that any given gallon of skim milk could outlast any given gallon of whole milk. The spoilage rate depends on so many variables — manufacturer, production methods, milk formulation, plant sanitation, storage temperatures, pH and moisture content, to name a few — that a small change in just one of them could give any particular container of milk a slightly longer shelf life than another.

A couple of other factors make things even more ambiguous. For one, it's pretty much impossible to pinpoint the exact moment of spoilage. Depending on your sense of smell and taste (and your tolerance for changes in milk flavor), you might turn up your nose at a gallon of milk that someone else might readily swig. And there's no federal regulation of milk expiration dates in the United States — only 20 states have standards, and they vary widely. One state might mandate a "sell by" date of a certain number of days after pasteurization, and milk jugs in another state will be printed with a "use by" date [source: Cormier].

The upshot: Don't base your milk purchases on which type might last longer. If you're concerned about shelf life, you'd be better off following a few simple steps to slow down milk spoilage, whether you're a whole or skim drinker. First, make sure your refrigerator is the correct temperature: It should be set at 40 degrees Fahrenheit (4.4 degrees Celsius) [source: FDA]. Store your milk on an interior shelf instead of on the door, which fluctuates more in temperature. And put your milk back in the fridge as soon as possible — leaving it out on the counter for even a few minutes exposes it to light and heat, giving bacteria a chance to spring into action. 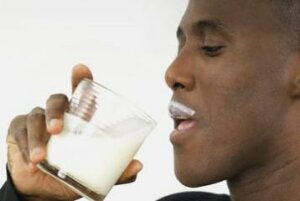 Is milk good for you? 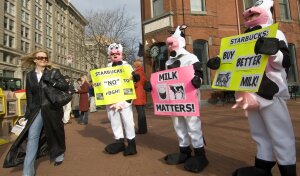 Are there hormones in milk?

How does whole milk affect my risk for high cholesterol?