How did people discover wine? 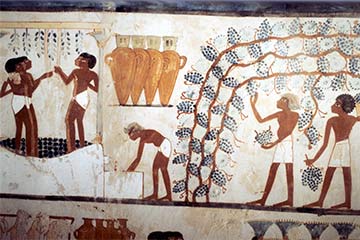 This wall painting from the tomb of the scribe Menna in ancient Egypt, circa 1419-1380 B.C.E., shows workers picking grapes in a vineyard and treading them, presumably to make wine.
Ann Ronan Pictures/Print Collector/Getty Images

You're hanging out with your Paleolithic pals, chipping away at stones and arguing about whose spearhead is the pointiest. As always, you're keeping an eye out for any cave lions that might be on the prowl. As long as the birds keep up their chatter, you know it is business as usual. Then you hear it; not the silence that signals the entrée of a predator, but a new flurry of activity among your feathered warning system.

You discover the birds are feeding on fermented fruit. They gorge themselves on it, unable to resist the temptation even after they're too full to properly fly. So you sample it too, slurping the juice of spoiled, wild grapes. The more you drink, the less you worry. This drink, so off-putting at first, feels like magic.

Although there's no record of how wine was first discovered, archeologists have sussed out a theory in which Stone Age people followed the cue of animals eating fermented fruit. Finding it to their liking, the Paleolithic people (who lived from earliest mankind to about 10,000 B.C.E.) brewed their own version by stuffing animal-skin pouches with wild grapes, allowing the grapes to spoil and then drinking the liquid [source: Cocke]. Not only did the beverage provide the same socially lubricating benefits as it does today, it was probably used as medicine, too.

Archaeologists have discovered grape vines dating to 60 million years ago. For much of human history, winemaking was a skill that didn't need to be recorded; it was passed from generation to generation through apprenticeships and informal lessons by family members. The first written account of wine appears in the Old Testament of the Bible and depicts Noah surviving the flood, departing from the ark, and planting grape vines to make wine [source: Wine Pros].

When archaeologists discovered 9,000-year-old rice and honey wine residue on pottery shards in central China, they had clear proof of ancient fermentation. It was a find echoed in other parts of the world. In the Middle East, grape remnants have been found in 7,400-year-old jars, accompanied by bits of tree resin thought to be a wine preservative. In Egypt, medicine vessels in the 5,000-year-old tomb of Pharaoh Scorpion I were found to be spiked with wine [source: Borrell].

What may be the world's oldest intact bottle of wine was discovered in 1867 while excavating a Roman stone sarcophagus under a vineyard near Speyer, Germany. The bottle -- its contents preserved -- dates from about 325 C.E. and is on display, still unopened, at Germany's History Museum of the Pfalz [source: Wine Pros].