The Pros and Cons of Being a Food Taster 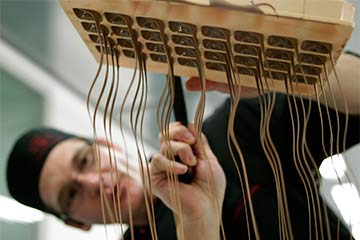 Francois Savary of the Chocolate Center of Excellence performs a praline shelling demonstration at the Swiss chocolate maker Cailler in 2012.
© DENIS BALIBOUSE/Reuters/Corbis

There are many pros to becoming a professional food taster. For starters, the salary's not so bad. While the Bureau of Labor Statistics doesn't have a category for "food taster," its May 2013 occupational employment and wages report said the mean annual wage for food scientists and technologists was $65,340, with some professionals earning more than $100,000 annually. That's not too shabby. And if you're tasting Ben & Jerry's ice cream or Godiva chocolates nearly every workday, that's an additional -- and delectable -- perk.

But the job has its less glamorous side, too, mainly for the nonprofessional tasters. Tasting can be quite monotonous, for one thing, as tasters often examine one type of product, such as onion rings or coffee, for weeks at a time. It also requires a lot of concentration. You're typically not eating a fistful of chips and saying yay or nay. You'll take a small nibble out of a cookie, for example, and have to evaluate everything ingredient by ingredient, aspect by aspect. How buttery is it? Can you taste the vanilla? How strong is the cinnamon? Did it crumble or melt in your mouth? Were the raisins too dry? You may then have to assign each ingredient or aspect a numeric ranking. Then you spit it out. If you're working as part of a group sensory panel, discussions and negotiations with your fellow panelists may also have to take place, which can sometimes become prolonged and heated if panelists disagree [source: Saelinger].

Sometimes there are side effects from taste-testing so many similar foods over and over, too. One consumer taster spent eight months on a panel for frozen fried foods, mainly sampling french fries. He reported coming home after tastings with huge blisters in his mouth from all of the salt. He added that many of his fellow panelists started having dental and health problems, so he decided to quit [source: Dang].

Finally, tasting can be an exhausting, stressful job, as it takes a lot of concentration for a proper evaluation. And your taste buds are easily fatigued. Tasters generally only work a few hours at a time, and some just an hour or so a few days a week. On the other hand, this type of schedule makes it a great part-time job for many. The pay for the non-professional might range from $12 to $16 per hour [source: Dang].

And in case you were wondering, people sample pet food, too.