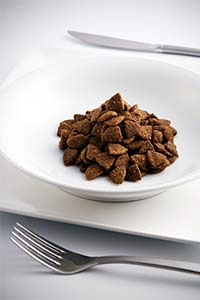 Would you taste dog food for a living?
Joan Vicent Cantó Roig/Thinkstock

You may think anyone who even considers taste-testing pet food is desperate, a bit wacky or both. But you'd be wrong. The job is actually typically a highly-skilled one, and more like a combination of researcher and taster. Generally someone with a doctoral degree, a pet food taster's main job is testing, not tasting -- evaluating a given pet food's nutritional value, writing reports and determining ways to enhance new pet foods currently being developed [source: Inside Jobs]. Still, at some point they have to get down to business: sampling it.

Before digging into a bowlful of pet food, the taster first critically appraises its smell. While many animals wolf down their food, appearing to pay no mind to smell or taste, its smell is actually one reason why they like it. Additionally, pet owners are picky about a given pet food's odor. Who wants their house to reek of fish or liver? After evaluating the smell, it's time for the pet food taster to nibble that kibble. As with all other food tasting, testers evaluate its flavor, texture and consistency, and then -- thankfully -- spit it out.

Is it really necessary to taste pet food? Yep. Pets can be just as selective about their food as we are. If a pet food taster thinks a particular food tastes awful, it's likely the pets would as well. The good news? A professional pet food tester-taster generally earns at least $34,000 per year, and can even rake in more than $100,000 annually. Makes the job a bit more, um, savory [source: Inside Jobs].

I'd love it if a food scientist peered into my husband's mouth. I have a feeling he just may be a 'super taster' -- someone with two or three times the normal number of taste buds. He can discern nuances like oak and vanilla when wine-tasting, and can pick out coconut and lemon in any food, even if it contains just a hint. I thought I had defective taste buds before working on this article. Now I know he likely just has loads more than I do.