Browse the article The Humble History of Pumpkin Pie 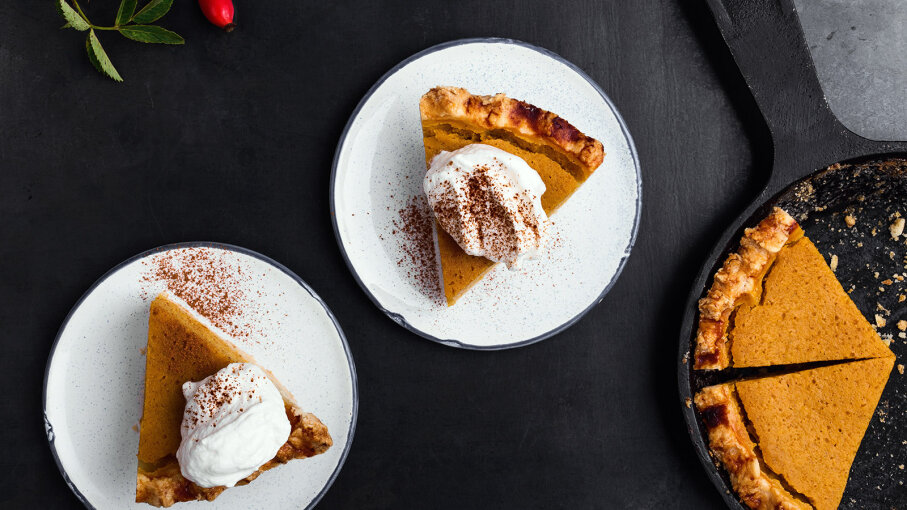 The pumpkin pie we know and love today isn't quite what it was when people first started using pumpkins as fillings in the Middle Ages. istetiana/Getty Images

Holidays in the United States just aren't as comforting or festive without pumpkin pie. (And honestly, where would Starbucks be without its pumpkin spice lattes?) But, think about this: Pumpkin pie is a pie. Filled with squash. Who in the world decided to fill a pie with a squash?

The history of how pumpkin pie became so popular is a story that smashes together medieval traditions, indigenous food from Africa and the Americas, and the most sought-after goods of ancient trade routes through Asia and the Middle East.

But first let's start simply with the pie, which was more popular during the Middle Ages in Europe than it is in the U.S. today, according to Ken Albala, professor of history at the University of the Pacific in Stockton, California. He's also author of more than 25 books about food and food history, including "Food in Early Modern Europe." "There were a lot of pies, fruits, meat, fish, vegetables," Albala says in an email.

In medieval times, pies looked much different than the ones we know today. And people didn't eat the crusts. (Heartbreaking!) Instead, pie crusts were made of a dough that was thick and bland — not flaky and buttery — and were most often single-use food serving vessels. Medieval pies, Albala explains, were made freeform without a pie plate, so they stood higher than what we're used to seeing in pies today. "[The people] poured hot gelatinous gravy into a hole at the top to keep air out," Albala says. "And often, but I don't think always, [they] broke open the pie and scooped out the contents, throwing away the crust."

But that ended around the 15th century and people stopped tossing out crusts. When European settlers arrived in North America, eating pie crust became normal and a very important part of life. Food was scarce, especially during winters, and eating pie crust became a great way to stretch small amounts of food to feed hungry people. By the 17th century, eating "a slice" was the way to savor pie.

As for the filling: In Medieval Europe, there was no pumpkin. Instead, Europeans made pies with gourd fillings, favoring varieties that originated in Africa. Thanks to the Columbian Exchange — the exchange of plants, food, animals, microbes, people and culture brought about by the European visits to the North and Central America — Europeans got their first taste of pumpkins. While it took years for them to warm up to some foods from North, Central and South America (things like potatoes and tomatoes were considered poisonous), they took to pumpkins quickly because they were similar to the gourds, with better flavor.

"Pumpkin pie as we know it is fundamentally medieval," Albala says. "Pumpkin spice is a classic medieval combination."

And the spice combination that we today associate with autumn, comfort and longer lines at coffee shops? In the Middle Ages, it wasn't just used for squash pies. A similar spice combination was used in everything during that time period. Not only did it taste good, those same spices were also considered a status symbol that wealthy people used to flaunt their riches. Sugar was rare, too. If you could offer guests a feast featuring spices, sugar and vegetables from the New World, you were rolling.

"You find the cinnamon, clove, ginger, nutmeg combo everywhere up into the 16th century," Albala says. "By then they were often combined with sugar, too. There are standard and 'poudre fort' combinations that are spicier with pepper, sometimes grains of paradise. But what we think of as pumpkin spice goes into most recipes, until French haute cuisine in the 17th century begins to banish them to the end of the meal, along with sweets."

Here's a very early recipe for pumpkin pie — then called "pumpion pie" — published in the British cookbook, The Accomplisht Cook, from 1685:

"Take a pound of pumpion and slice it, a handful of thyme, a little rosemary, and sweet marjoram stripped off the stalks, chop them small, then take cinnamon, nutmeg, pepper, and a few cloves all beaten, also ten eggs, and beat them, then mix and beat them all together, with as much sugar as you think fit, then fry them like a froise, after it is fried, let it stand till it is cold, then fill your pie with this manner. Take sliced apples sliced thin round ways, and lay a layer of the froise, and a layer of apples with currants betwixt the layers. While your pie is sitted, put in a good deal of sweet butter before your close it. When the pie is baked, take six yolks of eggs, some white-wine or verjuyce, and make a caudle of this, but not too thick, but cut up the lid, put it in, and stir them well together whilst the eggs and pumpion be not perceived, and so serve it up."
Baking pumpkin pie during the Thanksgiving holiday has become almost as traditional as the holiday itself.
GMVozd/Getty Images

Ultimately, by the 18th century, the British lost their love for pumpkin pie and began to negatively associate pumpkins with Native Americans. They instead preferred apple, pear and quince pies, which they considered more sophisticated.

But at the same time, colonists in America began to make pumpkin pie on their own. "American Cookery" by Amelia Simmons is considered by food historians to be a kind of "culinary Declaration of Independence" from England. It's the first cookbook ever written by an American featuring ingredients indigenous to America and published in America. Simmons' recipe for pumpkin pie:

"One quart stewed and strained pumpkin, 3 pints cream, 9 beaten eggs, sugar, mace, nutmeg and ginger, laid into paste No. 7 or 3, and with a dough spur, cross and checquer it, and baked in dishes three quarters of an hour."

Simmons' recipe is very close to what we recognize today as traditional pumpkin pie, with one exception: Her recipe calls for a top crust. By the early 1800s, pumpkin pie became a single crust pie — and a mainstay of American cuisine and Thanksgiving feasts.

Now That's Sweet
If you prefer your pie the morning after Thanksgiving with a cup of coffee, you're upholding another American tradition. Up until the late 19th century, people regularly ate breakfast pie, including flavors like pumpkin and apple. Breakfast pie was on hotel and restaurant menus and held a regular spot on the breakfast menus in the homes of Ralph Waldo Emerson and Oliver Wendell Holmes.