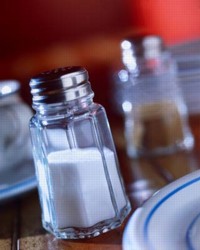 Q. Why do so many desserts, such as cookies and cakes, call for salt? Is it necessary?

A. It may be hard to imagine, but salt was a prized commodity throughout the world for much of history. It was the primary method for preserving food in the days before refrigeration, and it also was used in religious ceremonies.

In fact, salt was so valued it formed part of a Roman soldier's wages; it's the root of the word "salary." As late as about 60 years ago, Gandhi's march to the sea to harvest salt in defiance of British law was a major turning point in India's quest for independence from Great Britain. So salt has as lofty and important a place in history as it does in culinary practice.

In cooking, we usually think of salt as a flavoring on its own. But salt is important for other reasons as well: In yeast breads, salt controls yeast growth so that the dough doesn't rise too fast or too much.

Salt also reacts chemically with water and foods to bring about specific results. In making mayonnaise, for example, salt will keep the egg yolks clear and help them thicken. A little salt added to grains will keep them from absorbing a lot of the cooking water so that they retain their shape.

Salt enhances and intensifies food's other flavors, even in sweets such as candy, cookies, and cakes. In desserts, for example, a little salt tones down the sweetness, keeps it from seeming cloying, and enriches the overall flavor.

Q. Help! Is there a way to absorb or reduce the salt after I've made my soup?

A. Fortunately, there's an easy way to fix this problem. Just add a peeled potato to your soup. It should absorb the excess salt and reduce the salty taste. If you're watching your sodium intake, you can just discard the potato pieces.

Q. I have diabetes and have been placed on a salt-restricted diet. I buy reduced-sodium products, such as crackers. I would like to try reduced-sodium chicken or beef broth but don't know if I should use them. Please advise.

A. Using reduced-sodium products such as broth is an impor­tant step to take. Reduced- or low- sodium broths are one-third to one-half lower in sodium than regular broths. Low-sodium broths must have 140 mg sodium or less per serving.

You can see that using low-sodium beef or chicken broth can go a long way in helping to cut back on salt (sodium). How much you use also makes a difference.

If you have high blood pressure, you should try to limit your sodium intake to less than 2,300 mg per day -- that's the amount of sodium in 1 teaspoon of salt. However, the lower the better.

To learn more about salt and its use in foods, see: