by Alia Hoyt Oct 10, 2018
Turmeric, a key ingredient of curry, is being hailed as a treatment for all kinds of health issues. Which ones are real and which are hype? lacaosa/Getty Images

A particular staple of Indian and Middle Eastern cuisine, turmeric has gone totally mainstream in recent years. "You'll find turmeric in recipes for everything from lattes to curries to soups these days," says Melissa Majumdar, registered dietician, spokesperson for the Academy of Nutrition and Dietetics, and nutrition coordinator at Brigham and Women's Hospital in Boston in an email interview.

Turmeric gives curry powder its bright yellow color, but in addition to flavoring dishes, this spice has been used medicinally and in religious ceremonies for more than 4,000 years. The plant is a relative of ginger, and is grown predominantly in India, although it's also farmed in other parts of Asia and Central America. Eighty percent of the world's turmeric crop is consumed in India, where it is part of the standard daily diet.

Some people are skeptical of turmeric's glowing rep, however. After all, we've gotten hyped up about things like fish oil supplements and coconut oil before, only to have our hopes completely dashed, or at least tamped down quite a bit when scientists studied them. What about turmeric? Is it more than just a food fad?

Turmeric has been part of Ayurveda, a branch of alternative medicine that treats mind, body and spirit together, for thousands of years. "In Ayurvedic practices, it is thought to improve the overall energy of the body," explains Majumdar.

Much like modern-day prescription drugs, turmeric has an "active ingredient," called curcumin, the bioactive compound that gives the spice its oomph. In fact, curcumin is the reason turmeric is claimed to help with a litany of health issues like digestion regulation, hay fever, skin issues, breathing problems, gas relief, PMS, back pain and even Alzheimer's. Most importantly, turmeric has been hailed for its anti-inflammatory properties, much like ginger. Turmeric seems to block inflammatory cytokines and enzymes within cells in your body.

But does science back this up? One small randomized study in 2012 gave 500 mg of curcumin to patients with rheumatoid arthritis, while a second group of patients was given 50 mg of diclofenac sodium, an anti-inflammatory drug. A third group got both treatments. While all three groups experienced a reduction in swelling and tenderness of their joints, the group that got only curcumin had the most improvement.

Another randomized study from 2014 of 107 people compared patients with osteoarthritis in the knee who were given 1,000 mg of curcumin with patients who were given 800 mg of ibuprofen. The scientists found that there was a similar rate of reduction in pain when walking for both groups. Nevertheless, the National Institutes of Health (NIH) says that claims of the anti-inflammatory properties of turmeric and its inherent curcuminoids have yet to be validated by strong studies. That's not to say that turmeric doesn't relieve inflammation – just that science hasn't yet definitively determined whether or not it does.

Indeed, turmeric still being looked at for this and a number of other benefits. The NIH also notes that preliminary studies show that curcuminoids could lower the number of post-surgery heart attacks in bypass patients and also reduce the skin irritation that often occurs after radiation treatments for breast cancer.

Another promising use for turmeric may be depression. "Turmeric and depression has not been studied on a long-term basis, but in 6-8 week trials, participants demonstrated improved symptoms when taking turmeric alongside their antidepressant," Majumdar says. One six-week study showed curcumin was almost as effective as the drug fluoxetine (Prozac) at relieving depression and didn't cause that drug's side effects like "thoughts of suicide."

Even if the medical establishment is not giving turmeric its full endorsement yet, there's not much to lose by trying the spice for medicinal purposes. The NIH has declared its active ingredients to be "generally considered safe." However, it warns that high doses or long-term use may cause gastrointestinal problems.

So how much should you take? Since 1 teaspoon of turmeric has 200 mg of curcumin, you'd need to add about three teaspoons to your food each day (see sidebar for some recipe ideas). You can also buy the active ingredient curcumin as a supplement in health food stores. A dose of 500 to 1,000 mg each day can help you fight body inflammation.

Be sure to let your doctor know if you're going to be taking curcumin, because curcumin supplements often have an ingredient called piperine which increases curcumin absorption in your body but may also slow down the elimination of other prescription drugs you might be taking for conditions like seizures and high blood pressure. This slow metabolism in your body may make those drugs toxic to you.

Now That's Yummy
Want to incorporate turmeric throughout your day? Try this breakfast smoothie to start, enjoy some tasty turmeric Greek yogurt chicken salad lettuce wraps for lunch and then dine on authentic chicken tikka masala for supper. For good measure, brew a batch of turmeric tea to enjoy all day long! 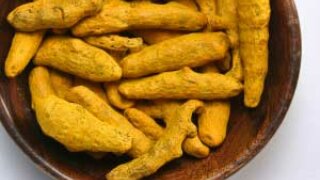 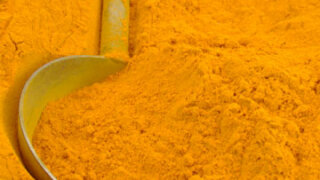 How does curcumin benefit skin? 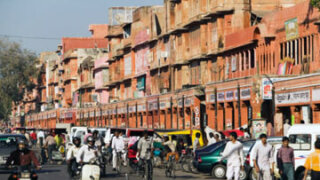