The Surprising Reason Why Vanilla Is So Expensive

Browse the article The Surprising Reason Why Vanilla Is So Expensive 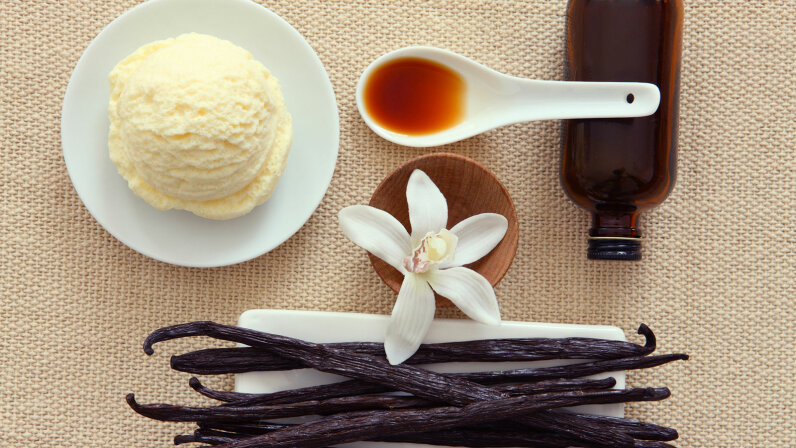 The vanilla pod (shown in front) is difficult to grow and harvest, which is why most vanilla (for instance used in ice cream) is artificial. Daniel Hurst Photography/Getty Images

A trip down the baking aisle can land budget shoppers in a serious quandary. Why pay nearly $20 for 4 ounces (119 milliliters) of pure vanilla extract when you can get the same amount of imitation vanilla flavor for less than five bucks? Why does real vanilla cost an arm and a leg? There are a few good reasons.

It's a classic case of supply and demand. Much of the world's supply of vanilla beans (about 80 percent) is grown in one place, on the island of Madagascar, explains Rave Reviews nutrition coach Elliot Reimers via email. The last few years have seen the island ravaged by multiple storms (Cycle Enawo hit in 2017), wrecking thousands of plants and driving prices up to more than $600 per kilogram (around $300 per pound). "This is 10 times more than it was a few years ago," he says.

Although 2019 prices proved to be more stable than the fluctuating rates of 2017, 2020 was forecast to see a 25 percent reduction in production, which could send costs shooting upward again, according to flavorings company FONA. But that was predicted before the COVID-19 pandemic happened, which seems to be sending prices lower.

The other major contribution to sky-high vanilla prices is the fact that the plant is just so difficult to grow. "Vanilla comes from an orchid plant. While there are 100+ varieties of orchids, only one, the vanilla planifolia, grows vanilla beans," says Jessica Formicola, owner at Savory Experiments in an email interview. "Orchids are finicky plants and hard to keep alive. Orchid flowers are hand-pollinated during a short flowering period," she adds.

The hand-pollination process is difficult and requires an experienced person to perform it successfully. Typically, it's done by farmers who've been in the vanilla-growing game for generations. The process doesn't end once the beans are harvested either. The crop must be cured and dried, and so from beginning to end (growth to export) the process takes a solid year.

"Vanilla is the most labor-intensive crop in the world which is why it's only second in price to saffron," explains "Vanilla Queen" Patricia Rain, culinary historian, and owner of The Vanilla Company. She notes that the orchids flower just once a year and the hand pollination must take place on that day.

Ironically, many farmers had moved away from growing the labor-intensive vanilla before the 2017 Cyclone Enawo made landfall, because of low prices for the product. At the same time, consumer interest in "real vanilla" had started to increase, further exacerbating the supply problem.

Is Real Vanilla Worth the Price?

In baking, vanilla does more than just make something taste vanilla. "Much like salt, vanilla extract enhances the other flavors of the recipe," says nutritionist Lisa Richards.

That said, when a recipe calls for pure vanilla extract it can be tempting to sidestep the authentic, but pricey version in favor of the much cheaper imitation stuff, which is chemically synthesized from products as varied as coal tar, wood pulp and guaiacol (a petrochemical).

But everyone we talked with for this article said to buy the real thing. "Anyone who is serious about quality recipes knows that the best ingredients make the best products. So, yes, it is absolutely worth it," says Rain. "Further, only the manufacturer of chemical imitation vanilla makes money. Purchasing pure vanilla helps to keep the industry alive and farmers with a market to sell their vanilla."

Now That's Cool
Real vanilla is the only flavor regulated by U.S. law, says Business Insider. The Food and Drug Administration mandates that a gallon of real vanilla extract have 13.35 ounces (378 grams) of vanilla beans in a solution of 35 percent alcohol. But 95 percent of the vanilla flavoring used in foods we eat (like vanilla ice cream) is synthetic.