Why does salt make you thirsty? 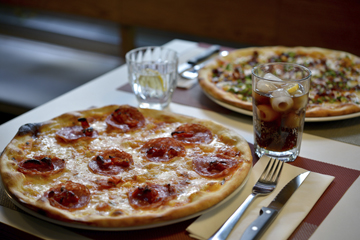 Pizza is delicious (and salty), but why does it make you thirsty?
Tunçsel ülkü/ThinkStock

Troy planted himself on the couch, glanced at the basketball game on his living room TV and pulled the coffee table within easy reach. The reason? That's where he had set the hot, fresh pizza that had just been delivered. He opened the lid and reached for a slice, its crust bending under the weight of pepperoni, ham, bacon and sausage, and sprinkled a little salt on top for good measure before digging in. Six slices later, Troy was stuffed to the gills — and unbelievably thirsty.

From the cured meats to the extra sprinkle, Troy had just ingested an unbelievable amount of salt, and his body began making adjustments to handle it. The salt passing through the wall of his small intestine was entering his bloodstream and making the salt content in his blood rise. As saltier-than-normal blood zooms through veins and arteries, the body senses an imbalance. When there's more salt in the fluid surrounding the cells than in the cells themselves, the sodium-rich fluid attempts to pull even more fluid out of the cells. It's a condition known as hypernatremia, and it's a red flag that sends the cells' chemical messengers rushing to the brain to report the high salt levels in the fluid around the cells and decry their potential dehydration. "Water! Water! Water!" signals the brain and — voila! — you're thirsty.

The "thirst center" in your brain that compels you to reach for a tall glass of water is located in the hypothalamus, which also helps regulate sleep patterns, appetite and body temperature. When sensors in the thirst center receive signals that there's too much sodium in the bloodstream because you binged on a salty snack mix, for example, the hypothalamus sends out an SOS: "Drink now." And bingo. You're thirsty.

Age and disease may inhibit the brain's ability to compel you to take in fluids. In other words, people can lose their sense of thirst, which is a dangerous condition considering the body is about 70 percent liquid and needs adequate hydration for its internal organs to work properly. Proper hydration also aids the regulation of body temperature and helps ensure that vitamins, hormones and other substances get where they're needed. And just imagine how dehydration gums up the works in your digestive system [source: Society for Neuroscience].

Whether you're about to munch on some sodium-laden cured meats, a salty snack or an extra sprinkling of salt, get ready to grab a big glass of water. You're about to get really thirsty.