The History of Cola 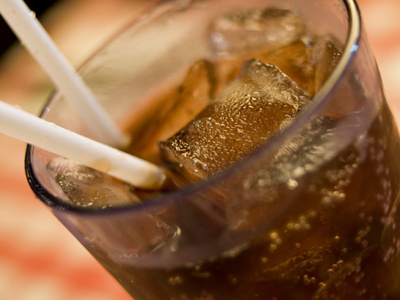 The Coca-Cola Company is behind the rage of cola.
©iStockphoto.com/AndrewJohnson

The next time you raise your glass or can of cola, say a silent thank you to the Coca-Cola Company. Whatever your cola preference happens to be, Coca-Cola, Pepsi Cola or any of a pack of lesser-known cola brands, the Coca-Cola Company has the singular distinction of being the original inventor of the popular brown brew. Clever marketing and inspired product placement may make you feel that your cola is a modern, youth-oriented beverage, but cola has been the drink of choice for generations of folks who like a little carbonation in their beverages.

On May 8, 1886, the folks at Jacobs' Pharmacy in Atlanta, were in for a bit of a surprise. A local pharmacist, Dr John Stith Pemberton made a historic visit to promote a new health tonic he'd concocted. After sampling it, the pharmacy decided that the brown beverage was tasty enough to offer as a fountain drink. This was back when many pharmacies had their own refreshment counters, like built-in restaurants. The new drink was a blended product using syrup and carbonated water. It sold for five cents a glass.

Alternately marketed as a brain tonic and cure for nervous afflictions, cola was born.

With an assist from Pemberton's bookkeeper, Frank M. Robinson, who came up with the alliterative name Coca-Cola, the syrup went into wider distribution at other fountains in the Atlanta area. In the beginning, sales rose slowly, but fate was about to take a hand with a little help from the Biedenharn Candy Company.

Joseph Biedenharn, a candy maker, began bottling Coca-Cola in 1894. Suddenly, a refreshing carbonated beverage was available to a whole segment of the population that didn't have ready access to a soda fountain. The resulting boon for Coca-Cola brought a 4,000 percent growth in sales over a 10-year period (1890 -1900).

Over the next 20 years, the Coca-Cola Company opened more than 1,000 bottling plants in the United States and extended its reach across Europe and into Asia. John Pemberton and his heirs would never reap the rewards of his remarkable invention, though. He sold off his interest in the business before it really took off. Asa G. Candler was more farsighted. A shrewd businessman, Candler acquired control of Coca-Cola and was instrumental in catapulting it to beverage superstardom.

Where Does Pepsi Fit In?

While Coca-Cola was making the rounds in Georgia and expanding its cola empire to other continents, Caleb Bradham, a drug store owner in New Bern, N.C., formulated his own cola product and began selling it in 1898 as a remedy for dyspepsia. In the same year, he settled on the final name, Pepsi-Cola. In his first year of operation, Bradham sold more than 8,000 gallons of syrup.

Pepsi-Cola went through good times and bad, bankruptcy, the Depression and a couple of changes of ownership before falling into the hands of Charles Guth. Guth made minor changes to the syrup recipe and eventually embarked on a clever marketing strategy, offering a larger portion size, 12 ounces, at a reduced price. This succeeded in revitalizing the brand and beginning the long-held rivalry between the two major cola companies.

What Is Cola, Anyway?

Commercial cola recipes are closely guarded secrets. Often there's a mystique surrounding the ingredients, complete with suggestions of skullduggery and whispers of industrial espionage. These stories are often perpetuated by the manufacturers themselves to create some buzz and boost sales. While the recipes are a secret, a little scientific sleuthing will reveal the most likely ingredients in cola.

There's no doubt that colas are blended products made up of a number of components. Some ingredients in cola are most likely: caffeine citrate, high fructose corn syrup, phosphoric acid, cola nuts, caramel coloring agents, vanilla, citrus oils and spices like nutmeg and cinnamon.

Depending on the brand you choose, there are probably claims that only a couple of people in the world possess the "real" recipe, but beyond the hype and mythology, there is something you can count on. Whatever your cola of choice, you're probably a devoted fan who wouldn't consider switching.

Did You Know? During some hard times in the early 1930s, Charles Gurth offered to sell Pepsi-Cola to the Coca-Cola Company. They refused the offer without even placing a token bid.

Does whole milk spoil faster than skim milk?
What's the Difference Between Snow Crab and King Crab?
10 Cupcakes That Won't Put on the Pounds