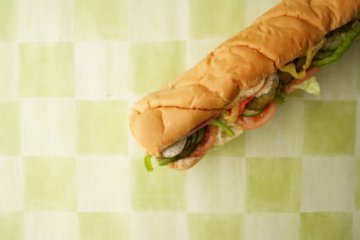 Whether you call it a hoagie, a grinder, or a sub, one thing remains: the hero is about as American as a sandwich can get. In its most traditional form, the hero consists of any number of meats (Genoa salami, mortadella, thinly sliced pepperoni, capicola, prosciutto), cheeses (provolone is the classic choice), veggies (no-frills lettuce and tomatoes, usually), and condiments piled generously on a long, either French or Italian, roll. And while the nomenclature might vary by region, the history of the hero is pretty straight and narrow, much like, well, the sandwich itself.

Common wisdom holds that the hero can be traced back to early 20th-century Maine and an Italian immigrant who started peddling basic sandwiches on freshly baked rolls. The name Giovanni Amato will sound familiar to foodies who really know their stuff: to this day, Amato’s sells pizza, pasta, and yes, that very same sandwich, in central Portland.

Fascination with Italian-American cuisine permeated the rest of New England, and by the beginning of World War I a restaurant in Boston began selling baked baguettes to navy servicemen stationed nearby—hence, the popularization of the nickname “submarine,” or “sub.” Of course, no history of an iconic food would be complete without some measure of disagreement: others still believe that Italian immigrant Dominic Conti was inspired by seeing a recovered 1901 submarine in a New Jersey museum. In turn, his granddaughter has claimed, Conti began selling traditional Italian “subs”—a crusty roll, cold cuts, lettuce, tomatoes, peppers, onions, oil and vinegar, and seasoning—from his grocery store in Paterson, N.J.

Contorted as the “sub” moniker may be, everyone seems in agreement that the term “hoagie” originated in 1950s Philadelphia, when Italian workers at a shipyard called “Hog Island” began making the sandwiches for themselves. The term “Hog Island” sandwich was shortened to “Hoggies,” and then “hoagie.” (A more sinister etymology holds that “hoagie” is slang for “on the hoke,” a disparaging remark among Philly’s Italian community to describe a poor person who subsisted on deli scraps: cheese, meats, and breads.) Anyway, the sandwich gained speed and was popularized as far as Pittsburg by the mid-1960s. And while most people tend to associate Philly with the cheesesteak, Ed Rendell, former Philadelphia mayor and former Pennsylvania governor, once declared the hoagie the city’s official sandwich. However you slice it, a defining characteristic of the Philadelphia version is the, uh, sub’ng of well-seasoned olive oil for mustard and vinegar.

The term “hero” didn’t actually pop up until 1937 New York, where it’s to this day served old-school Italian-style, with variations based on vendor, of course. Modern-day pizzerias have even capitalized on the ingredients they happen to have lying around: it’s not uncommon to see, say, chicken and eggplant parmesan heros even though tomatoes were historically omitted from the “hero” variation of the Italian sub.

Today, of course, a familiar sight to behold is competing hero shops on the same city block or in the same suburban strip mall. Just think of the fast-casual restaurants you can rattle off by memory: Blimpie (an Arizona-based chain that opened its first shop in Hoboken, N.J., in 1964), D’Angelo (which got it start under a different name in Massachusetts during the ‘60s), and, of course, Subway (the largest restaurant chain the world). Headquartered in Connecticut, Subway opened its first location in 1965 and today offers some pretty unusual variations on the traditional hero, including a giant six-foot-long sandwich that feeds up to 25 extremely hungry people.